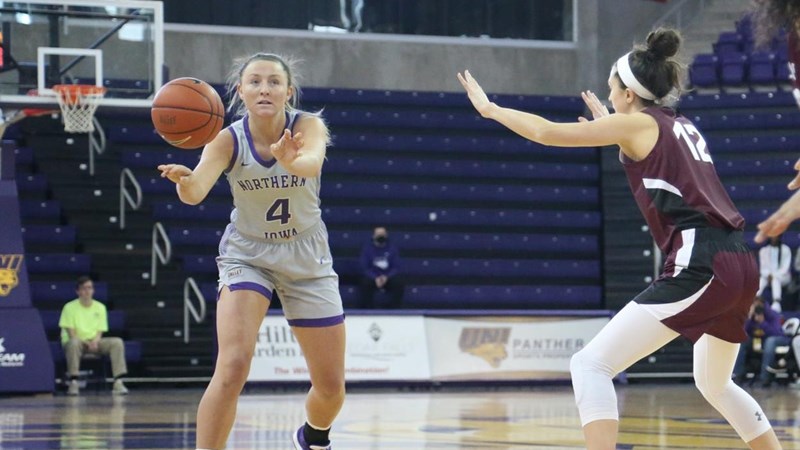 DES MOINES, Iowa — The UNI women’s basketball team hopes to make it a four-game win streak as they head to Des Moines to face off against in-state Missouri Valley Conference rival the Drake Bulldogs.

After a big week of conference wins, the Panthers will hit the road making the short trip to Des Moines for their first of two games against Drake. The Bulldogs are one of the Panthers oldest rivals with Friday evenings matchup being their 93rd overall meeting. The two teams last met on Feb. 24, 2021 with the Bulldogs coming out on top 77-56 at the McLeod Center. Panther fans traveling to the Knapp Center on Friday are required to wear masks inside the arena throughout the game.

– The Panthers head to in-state rival Drake this week putting their three-game MVC win streak on the line. It will be the first week for UNI to only have one game while in play since Thanksgiving week in November.

– Despite UNI’s long playing history against both Missouri State and Southern Illinois, the Panthers hadn’t won a game against the two teams back to back in program history, until this week. UNI pulled off a stunner of a home upset against the Lady Bears on Thursday, winning 74-65. The Panthers were again able to get out to a hot start and grab the 66-57 win against Southern Illinois on Saturday.

– Panther senior center Cynthia Wolf set a career high in blocks in UNI’s game against Southern Illinois. Wolf recorded four blocks in 18 minutes of play on Saturday. Her previous career high was three blocks against Saint Louis and the beginning of the season.

– The Panthers had a rare occurrence at their game against Southern Illinois this weekend. UNI saw the program’s first double technical foul call at the start of the fourth quarter following a review of an initial jumpball call.

– The Bulldogs are currently on a four game conference losing streak, having struggled to close out games against teams like Missouri State and Valparaiso.

– Drake is led by junior forward Maggie Bair, averaging 12.4 points per game with 5.5 rebounds and 1.1 steals. Bair returned to the Drake lineup last week after being unavailable for the team’s first conference roadtrip of the season.

– Drake junior guard Megan Meyer earned MVC Newcomer of the Week on Monday, after she averaged 11.5 points, 5.5 rebound, four steals, and 2.5 assist last week. She also set a career high with her six steals against SIU on Thursday.

– Bulldog Head Coach Allison Pohlman has strong ties to UNI as a former player and Assistant/Associate Head Coach. Pohlman played for the Panthers from 1996-2000 (at the time Allison Starr) and was an All-MVC First Team honoree and runner-up to Jackie Stiles for the MVC’s Player of the Year award in 2000. Pohlman currently holds the record for steals averaged per game in Panther history at 2.5 and is tied for scoring average with Jacqui Kalin. Pohlman was also an Assistant Coach for the Panthers from 2001-2006. She was then elevated to Associate Head Coach in 2006-2007. Pohlman is in her first year as the Bulldog’s Head Coach.

Quiz: Where Should You Go for a Self-Care Getaway?

Mountain snow and travel issues tonight into Monday, additional rain chances Wednesday and for the end of the week – YubaNet