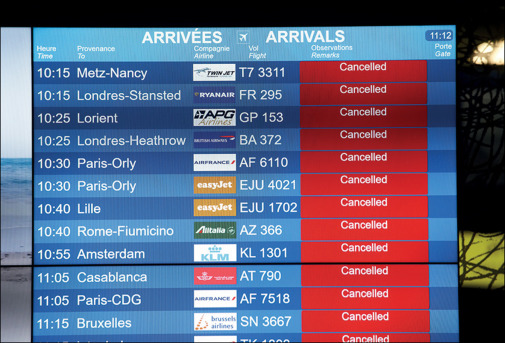 Many countries are limiting travel to stem the pandemic, but these measures are restricting the movement of vital equipment and personnel. Sharmila Devi reports.

The coronavirus disease 2019 (COVID-19) pandemic has sparked an unprecedented shutdown of borders and airlines, which is severely restricting the movement of essential medical personnel and supplies that are vital to stem the spread of the virus and save lives.

Around 90% of commercial passenger flights are grounded. More than 130 countries have introduced some form of travel restriction since the COVID-19 outbreak began, including screening, quarantine, and banning travel from high-risk areas.

The prolonged closure of borders goes against WHO’s advice that member states should not apply travel or trade restrictions to countries that are experiencing COVID-19 outbreaks. “There is no reason for measures that unnecessarily interfere with international travel and trade”, Dr Tedros Adhanom Ghebreyesus, WHO director-general, said on Jan 30 when declaring COVID-19 a Public Health Emergency of International Concern.

A group of authors wrote in The Lancet in February that the bans on travel from China, instituted by countries such as the USA, violated the International Health Regulations (IHR), a pact on collective action, which says that health measures implemented by countries “shall not be more restrictive of international traffic and not more invasive or intrusive to persons than reasonably available alternatives”. The latest version of the IHR was agreed in 2005 by 196 countries to provide the legal framework for WHO to lead global action against infectious disease.

At least 90% of the world’s population, or 7·1 billion people, live in countries with restrictions on people arriving from other countries who are neither citizens nor residents, according to Pew Research Center analysis published at the start of April.

“Countries are making their own risk assessments that cannot be controlled by WHO” says David Heymann, who led WHO’s infectious disease unit at the time of the severe acute respiratory syndrome epidemic in 2002–03. “When airlines shut down, it is a big concern and a real issue, and they shut down because of regulations over crew safety and insurance.”

One of WHO’s reasons for counselling against travel bans is that restrictions might interrupt the delivery of needed aid and technical support, as well as the risk of giving a false sense of security to countries. Member states are instead urged to focus on preparing health systems and ensuring disease surveillance. In response to the global shutdown, extraordinary steps are now having to be taken to mitigate the unintended effects of the travel restrictions.

WHO said that travel restrictions in Africa are affecting the delivery of equipment and personnel vital for the COVID-19 response. “There are 47 countries not allowing any airlines to land and we need to support them with equipment, especially as we cannot send any experts to give technical support, for example, with contact tracing or analysis”, Michel Yao, head of WHO’s emergency operations in Africa, told The Lancet. “There is a big shortage of ventilators and also intensive care unit capacity. There are only about 3000 doctors who have intensive care unit expertise in all of Africa.”

As a result of the restrictions, the World Food Programme (WFP) is planning an ambitious network of air bridges that will act like a humanitarian airline for fighting COVID-19 around the world. WHO is the lead partner for sourcing medical supplies and personnel.

“Commercial flights are grounded and medical cargo is stuck. We can stop this virus in its tracks but we’ve got to work together. WFP is committed to getting vital medical supplies to front lines and shielding medical workers as they save lives”, said David Beasley, WFP’s executive director, in an April 14 press release when the first “solidarity” flight took off. “Our air bridges need to be fully funded to do this and we stand ready to transport frontline health and humanitarian workers as well as medical cargo.”

“Some 92% of passenger air traffic is grounded but what people don’t realise is that passenger planes also carry a large bulk of the world’s cargo and this poses a huge problem for us”, Amer Daoudi, WFP’s head of logistics, told The Lancet.

As of mid-April, WFP had received only 24% or US$84 million of the $350 million it requires initially to fund the scheme.

Daoudi appealed to the world’s airline associations, national governments, and military forces to provide up to six passenger, long-haul planes that could deliver supplies from strategic sources in China, the USA, and Europe to the WFP’s planned six regional hubs. “Market prices to source planes have quadrupled and we have only meagre resources.”

“I appeal to everyone, governments, NATO, whoever can help us to provide planes on behalf of the world, of everyone”, said Daoudi. “We have the capability but not the funds. The $350 million that we have asked for is just the initial amount and we are in the process of assessing total costs. We expect to have to operate hundreds of flights a month for at least 9 months.”

Médecins Sans Frontières (MSF) had received exemption from the EU’s ban on exports of personal protective equipment (PPE), said Brice de le Vingne, head of MSF’s COVID-19 task force. MSF needs PPE for its own personnel who work around the world as well as for training on infection prevention and control measures it provides, for example, in Iraq. MSF, along with many other health authorities around the world, has experienced difficulty sourcing PPE from suppliers given the great demand.

In mid-March, European countries in the Schengen area introduced border controls and checks, preventing the free movement of people. Many European countries also imposed controls on the exports of PPE to other European countries.The European Commission had to issue advice on March 30 to ensure that critical workers could reach their workplace across the EU. “Frontier workers” are those who live in one EU country but work in another. “Many of them are crucial for their host member states, for instance for the health-care system, the provision of other essential services including the setting up and maintenance of medical equipment and infrastructure, or ensuring the supply of necessity goods”, said a March 30 press release from the European Commission.

Around the world, health professionals are likely to face restrictions for some time. “In March, WHO’s regional office in Manila lost about a dozen highly skilled experts because travel restrictions meant that their governments advised that they should return to their home countries”, Abdi Mahamud, COVID-19 incident manager for the WHO Western Pacific region, told The Lancet.

Issues of deployment and repatriation of experts have also hit the Pan American Health Organization (PAHO), the WHO regional office for the Americas. “A recent example of this occurred when we deployed an expert to Guayaquil [Ecuador], which we were only able to do by hiring a charter flight from Colombia”, Jarbas Barbosa, assistant director of PAHO, told The Lancet.

Restrictions on commercial flights had also caused widespread disruption to deliveries of medical supplies, he said. “Shipments, including PPE, lab supplies, etc, have to wait for space on cargo planes and as demand for these planes increases, there have been challenges.”

To avert such difficulties, WHO has continued to caution countries over border closures. “We understand that many countries are implementing measures that restrict the movement of people”, Dorit Nitzan, WHO’s regional emergency director for Europe, told The Lancet.“Such restrictions must be based on a careful risk assessment, be proportionate to the public health risk, be short in duration, and be reconsidered regularly as the situation evolves.”

Given the global flouting of calls to keep borders open, discussion has started on overhauling the IHR to deal with future crises, said Heymann. “I have been involved in two rounds of informal discussions about updating IHR because the reality is few countries have respected it and kept borders open, making the WHO look weak”, he said.

“There is a stronger argument to keep trade [compared with passenger] links open to avoid food shortages. But countries must improve coordination and develop their capacity to fight infectious diseases—this is in the regulations but not adhered to, and this is much more important.”

Travel issue: In India, a photographer captures her homeland – The Washington Post