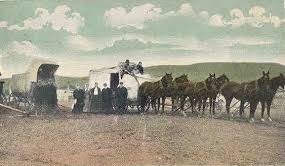 First came the horse for travel on the Western Plains. Then enterprising men discovered that people would pay to ride in more comfort and to travel faster than riding just one horse. The stagecoach was born. A stage, with changes of horses every ten miles or so, could make fairly good time, and anyone who had fare could travel inside, out of the rain and wind and most of the dust.

One of the more famous stage lines, after the Overland Stage Company, was the Deadwood Stage, also known as the Deadwood Cheyenne or Cheyenne-Black Hills stage. Deadwood had the gold and Cheyenne, at that time, was the only railroad terminus.

Established in 1876 by Red Cloud Agency trader, Captain F. D. “Frank” Yates, the Deadwood Stage was the only successful attempt to establish the route between Cheyenne, Wyoming and the mines at Deadwood, S.D., due to many Indian attacks.

The first stage was run on September 25, 1876. Two years later, the line was sold to Jack Gilmer and Monroe Salisbury of Ogden, Utah They hired Luke Voorhees as their general superintendent, who purchased it two years later. Voorhess continued to operate the line until 1882. The route was discontinued in 1887 when the railroad pushed through the Black Hills in 1886. One stagecoach in particular has a colorful history, and is now on display at the Buffalo Bill Center in Cody, Wyoming.

Buffalo Bill Cody, when he was scouting for General Crook drove this stage during the Crook Campaign in 1876 against the Sioux. After Crook’s campaign, Cody learned that the old stagecoach had been abandoned. Taking along a few companions, he proceeded to rescue it. When Cody organized his Wild West show, he secured permission to use the historic coach to depict some of the hazards of stagecoach travel in the west.

Buffalo, Clearmont and Sheridan also had stagecoaches. The Buffalo Stage and later the Buffalo-Clearmont Stage ran for many years carrying passengers, mail and other shipments.

Some of the articles from the old newspapers show that it was a busy time for stagecoaches. One of the earliest notations of the stage was an ad in The Buffalo Bulletin, Aug. 20 1891. At that time the railroad had reached Moorcroft, but was still under construction to Clearmont.

BURLINGTON – BUFFALO STAGE AND EXPRESS CO. SPEED, SAFETY AND COMFORT. DAILY 4 HORSE COACHES now run from Buffalo to the end of the B&M track. Tickets sold at Buffalo over the B&M to all points East, West, South and North. Leave Buffalo 2:30 p.m. Arrive at Buffalo 8:30 a.m. Leave Moorcroft at 2:30 p.m. Arrive at Moorcroft 8:30 pm. Passenger Fare, $15.00. 3 cents per pound on all baggage in excess of 50 pounds.

Senator McCormick, of Sheridan county, came down on the Buffalo stage Tuesday morning and at once took the train for Cheyenne.

Even into the 1900s, the stages still ran, although the trans-continental stage lines were gone due to the coming of the railroad, there were still short line runs between towns that had the trains and towns that didn’t.

In the winter, drifted snow could be a problem, but the mail had to go through.

After six days without mail, Buffalo’s Isolation In this respect will probably be relieved today, four men yesterday having penetrated to Banner from both Sheridan and Buffalo at the risk of freezing their limbs and possibly losing their lives. The stage coach which had been blocked at Kearney on the way from Sheridan to Buffalo also succeeded in getting through to Banner by the use of runners.

Although most stage drivers were men, there were some notable women stage drivers. Charlie Parkhurst also known as “One-Eyed Charley” or “Six-Horse Charley”, was a stage coach driver in California. Parkhurst fooled everyone into thinking she was a man. She ran away from home as a youth, took on a male name, and worked as a stable hand, gold miner, and stagecoach driver. It wasn’t until she died that her secret was known.

Six foot tall, muscular, pistol packing Mary Fields, aka Stagecoach Mary (1832-1914) drove a mail coach in Montana for many years. Born as a slave in Tennessee, Fields was one of the first women entrepreneurs and stagecoach drivers in Montana.

The Clearmont Stage had its own women stage driver.

Wrist Broke in Runaway: That the young women of Wyoming possess sterling metal is again proved by the daring bravery of Miss Princess Butler, who has taken a “man’s job” as driver of the stage between Passaic, Wyo., and Sayle, Mont. This is one of the pioneer spots of this pioneer state, where the railroad, the forerunner of civilization, has not made its, appearance. Yet here, as elsewhere, the days of thrilling stage “hold-ups” has passed into oblivion, and nothing but the clatter of spurs and the call of the cowboys, break the peaceful silence of the hills.

As Miss Butler was driving the stage horses over the familiar trodden road last week, a bolt happened to drop out of the double-tree. The horses immediately became frightened. While their fair driver sternly tightened the reins with all her strength, they pulled her from the seat. She succeeded in checking the horses and preventing a serious runaway, but broke her wrist in the struggle.

Mr. P. W. Powers of Passaic brought her to town Saturday, where her injury received medical attention. She will be able to return to the country today so that she might enjoy Christmas at home.— The Sheridan Enterprise.

Stagecoach travel even had its own rules.

The Wyoming State Fair management is out with the above unique cartoon which in its conception and portrayal excels anything ever attempted by a celebration or fair in the country. The original is a clever pencil sketch of an old-time stage holdup. The scene is laid at a lonely stage station where the bandits have fired the road ranch. Old Tom Cooper has the lines while the treasure is defended by four old-time messengers, among them being Scott Davis and Luke Voorhees who have more than once seen the real thing enacted. Coming to the relief are seen such noted characters as Frank Hadsell, R. Van Tassell, Lee Moore and a dozen other old time punchers who have written plainsmen history with their quirts and spurs…… The gathering of old-time freighters, prospectors and cow men at the Wyoming state fair will, in all respects be the most notable one of its kind ever held, for these old boys will be the real characters who enacted the stirring scenes that makes frontier history. Come to the Wyoming State Fair, Douglas, Wyoming, September 29 to October 2nd and see the real thing for yourself…. it is well to mention that this will be the thirty-sixth anniversary of the memorable hold-up of the Cheyenne-Deadwood stage coach at Cold-Springs on the western slope of the Black Hills. The stage will be actually driven by old Tom Cooper, the man that took the stage out after the hold-up. The stage, the harness and all the equipment are the very identical equipment and harness that was used on the stage on that occasion, and the same robes in the seats, and the same old treasure box can be seen and will be on exhibition at the state fair and will be used on the stage on this occasion. The old treasure box will be ruthlessly snatched from its place in the boot of the stage and its contents rifled by such men as Ed Patrick, Dan Fackler, Ed Morgan and others, plainly showing that the old boys still preserve the art and know how the trick was turned in the days when the real drama was played.

The Stagecoach: A colorful part of the West’s and Sheridan’s history, complete with road agents, hard-bitten drivers, and Indian attacks, has passed into the mists of history.

Travel Job: Get Paid to Make TikToks on a Trip to Budapest