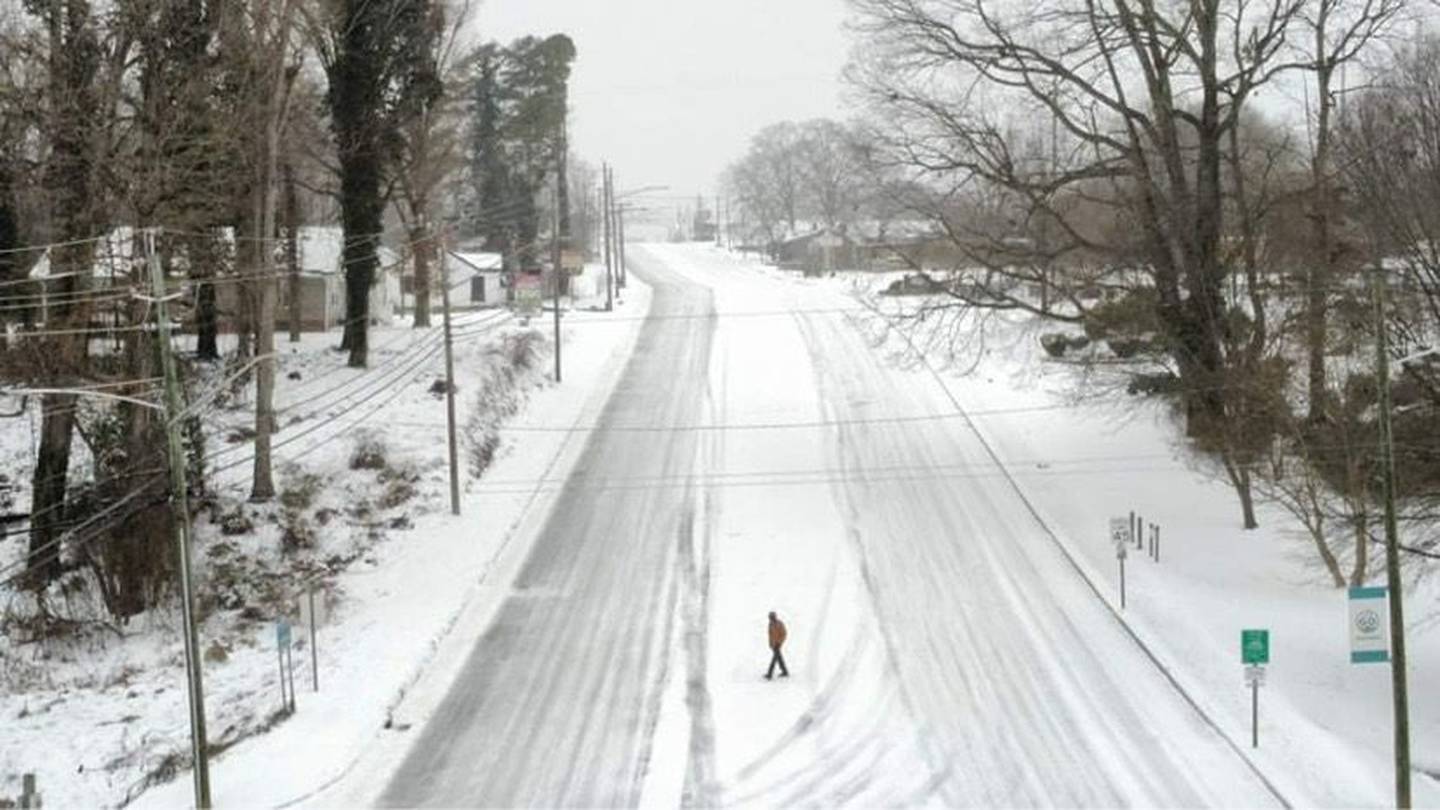 >> Watch Channel 9 at noon for team coverage as we track road and weather conditions across our area.

A dangerous winter storm combining high winds and ice swept through the Carolinas on Sunday, knocking out power, felling trees and fences and coating roads with a treacherous, frigid glaze.

>> Click here to see photos Channel 9 viewers have shared of the winter weather.

Scroll below for the latest updates on winter weather and road conditions:

Driving On A Sheet Of Ice
I captured this image standing on the double yellow line in the middle of Owls Den Road in Lincoln County. It’s covered in ice. It’s one of many roads that @NCDOT and emergency officials say are not closed but are nearly impassable. pic.twitter.com/3fy1mYExRO

Pretty This Morning, Maybe Not Tonight
Thank you to @wsoctv viewer Mike Gibson for snapping those drone pictures of snow in @CityofGastonia They are pretty pictures this morning but tonight some roads are expected to freeze in causing hazards that are hard to see. Be careful. pic.twitter.com/3lSkmo9LJa

Now that the clouds are clearing out, you can see the snowfall left behind from yesterday’s storm. The mountains continue to see snow showers all day long with another few inches of accumulation. pic.twitter.com/MYPKyVA2DQ

As we await the CMS decision for tomorrow: This is a street in Hidden Valley last night. Many neighborhood streets look like this still. Bus/student safety on neighborhood streets is always a main factor when deciding winter weather closures. pic.twitter.com/vY3SJxVskC

OFFICIAL: Due to the inclement weather from #WinterStormIzzy, @LNCharter will be CLOSED tomorrow, January 18th. This is considered a traditional “No School for Students” day.

We will continue to monitor conditions for potential operational impact to Wednesday.#LNCPride #nced

As of 9:20 a.m., around 42,000 @DukeEnergy customers are without power after the winter storm. Repairing 2,000 outage locations. Pinehurst/Carthage area, Upstate SC and western NC remaining hardest hit pockets. Thousands of workers engaged throughout the day to restore power. pic.twitter.com/82Gnb5MpEw

Emergency shelters that were activated across Mecklenburg County in response to the severe weather impacting the Carolinas are being demobilized Monday.

The Charlotte-Mecklenburg Emergency Management Office, in partnership with the American Red Cross and the town of Matthews, opened four shelter locations in Charlotte, Huntersville and Matthews on Sunday, according to a release from the office.

.@CharMeckEM and partners are demobilizing the emergency shelters. Staff at Crews Recreation Center and Hopewell High demobilized at 7 a.m. as there were no residents at those locations. Shelter crews at Mallard Creek High and Central Piedmont will demobilize at noon today. https://t.co/MUWCzNTds5

Due to heavy snow and ice, several bus routes may be experiencing slight detours. Normal routing will resume as snow is cleared. Riders can call CATS customer service at 704-336-7433 or download the CATS-Pass app for real time bus tracking.

A few snow showers are coming off the mountains through the northern foothills. Shouldn’t last all that long, mountain snow will last most of the day though. pic.twitter.com/sb3UFergIU

Folks, please don’t go out unless you absolutely have to. Roads are still iced over in the metro and snow covered up north where they had more snow. Be smart, it’s not worth it.

Hickory- Public Works is back out this morning trying to clear some of the roads. I just took this cell phone video along Lenoir Rhyne Boulevard. Crews are working 13-hour shifts right now. pic.twitter.com/eF5urTNMYy

Temps will slowly warm back above freezing by late morning and eventually get close to 40° this afternoon with that sunshine. Best to hold off any traveling for now. pic.twitter.com/piG9GE7keI

Give or take on a few locations… but our snow forecast was almost spot on yesterday. Snow forecasting in the south can be a nightmare w/ so many factors going into the forecast. I’m impressed w/ our team to say the least. Top: Our Forecast. Bottom: Observed Snow Totals. @wsoctv pic.twitter.com/6EnYKRVP6o

Quite the snowy scene from the Lake Norman cam early this morning. Roads are going to be very icy and slick. Our team is showing you the conditions you’ll encounter and how long it takes to thaw out this week. pic.twitter.com/sROVxvYOxX

A winter storm combining high winds and ice swept through parts of the U.S. Southeast on Sunday, knocking out power, felling trees and fences and coating roads with a treacherous, frigid glaze.

Tens of thousands of customers were without power in North Carolina and South Carolina Sunday evening, including 10,000 Duke Energy customers in the Charlotte area.

Highway patrols reported hundreds of vehicle crashes across the Carolinas, and Charlotte-Mecklenburg police said it responded to 53 wrecks Sunday.

The winter storm also impacted airlines, with more than 1,200 Sunday flights at Charlotte Douglas International canceled – more than 90% of the airport’s Sunday schedule, according to the flight tracking service flightaware.com.

Flight cancellations continued into Monday, with American Airlines, which operates 90% of CLT flights, canceling more than 100 flights for Monday.

Ahead of the storm, North Carolina Gov. Roy Cooper and South Carolina Gov. Henry McMaster issued state of emergencies as workers in both states spent days getting state roads ready for the storm — particularly preparing for ice.

>> For our minute-by-minute coverage of the winter storm Sunday, click here.

(WATCH BELOW: Tens of thousands of Duke Energy customers lose power across Carolinas due to winter storm)

Airbnb: Where are the best places to travel in the U.S. right now?

If you’re planning to travel to Mexico, here’s what you’ll need to know and expect – The Yucatan Times