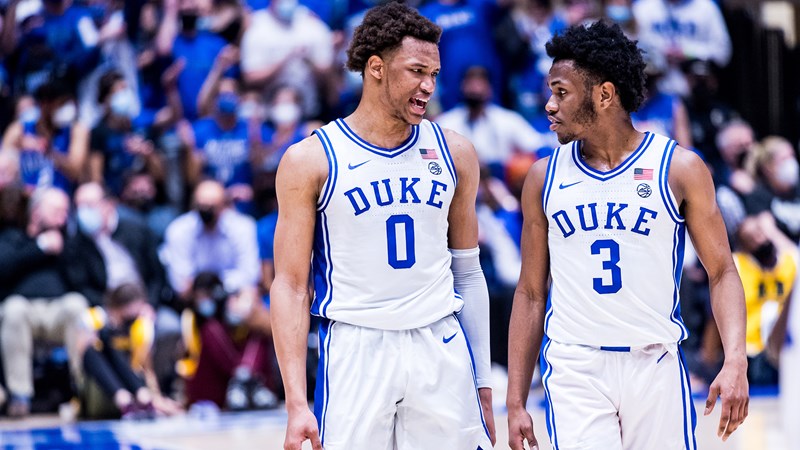 DUKE VS. LOUISVILLE
Saturday’s game is the 21st meeting between Duke and Louisville, with the Blue Devils leading, 11-9 … The Blue Devils’ 70-56 victory in last year’s ACC Tournament snapped a three-game winning streak in the series by the Cards, including a 70-65 setback on Jan. 23, 2021 at the KFC Yum! Center … Last year’s meeting in the ACC Tournament was one of Mark Williams’ signature games as the freshman led Duke with a career-high 23 points and 19 rebounds on 9-of-14 shooting … The 19 rebounds marked an ACC Tournament freshman record, surpassing 18 by Virginia’s Ralph Sampson vs. Clemson in 1980 … Eight of the last 10 games in the series have each been decided by less than 10 points, including the Cards’ seven-point victory (80-73) in overtime at Cameron Indoor last season.

Louisville is 11-9 overall and 5-5 in the ACC and has dropped five of its last six heading into Saturday’s game vs. Duke … Mike Pegues is serving as the Cardinals’ interim head coach, following a mid-season coaching change. Pegues was Louisville’s coach of record for the team’s first six games this season (5-1) due to a suspension of then-head coach Chris Mack … Pegues, who was an assistant coach for Mack at both Xavier and Louisville, played at Delaware from 1996 to 2000 for Mike Brey — a former Duke assistant and now the head coach at Notre Dame … Noah Locke leads the Cardinals in scoring at 10.2 points, while Malik Williams is averaging 10.0 points and 8.5 rebounds.

NOTHING EASY BEHIND THE ARC

Duke leads the ACC and is 13th nationally in blocked shots per game (5.7), paced by the ACC blocks leader, sophomore Mark Williams, who is eighth nationally with 3.26 blocks per game … As a team, Duke has finished ranked 42nd or better nationally in blocks in each of the last five seasons, including leading the nation in 2018-19 (6.8) and finishing second nationally in 2019-20 (6.1) … Only two power conference players have more rejections than Williams’ 62 and his 5.98 blocks per 40 minutes rank fourth among power conference players … Williams blocked 20 shots over the four-game span between Miami and Florida State, joining Mike Gminski and Shelden Williams as the only other Blue Devils all-time to swat 20+ in a four-game span … Williams has blocked 14.7 percent of opponents’ shots, the seventh best percentage in the NCAA … Williams has multiple blocks in 16 of 19 games this season … The 7-foot-1 sophomore posted a 19-point, 11-rebound and career-high eight block effort against NC State in just 27 minutes … He is 24-of-30 (.800) from the field over Duke’s last four games and averaging 14.8 points, 8.8 boards and 3.8 blocks in that span.

The ACC Freshman of the Week for the fifth time, Paolo Banchero is averaging a double-double over Duke’s last four games with 18.8 points and 10.0 rebounds, while dishing out 4.8 assists and shooting .583 (28-of-48) from the field in that span … He leads all true freshmen nationally in scoring (17.9) and is fourth in rebounding (7.9), while his eight 20-point games are the most by a power conference true freshman … He has reached double figures in every game this season, has 15+ in every ACC game and leads the league in scoring in conference-only games (19.9) … Banchero notched his fourth double-double of the season vs. Syracuse, netting 15 points and a career-high 13 rebounds … He followed that up with 19 points, seven boards and four assists Tuesday night against Clemson, including two crucial baskets in the final two minutes to help seal the 71-69 win … Banchero is Duke’s first back-to-back ACC Freshman of the Week since RJ Barrett in 2018-19 … He recently had 20+ points in four straight contests, capped off at Florida State when he posted a 20-point, 12-rebound double-double while dishing out a career-best seven assists … In the win at Wake Forest, he hit a career-high 11 field goals with five rebounds for 24 points … He nearly had his first triple-double vs. The Citadel, with a career-high 28 points, eight rebounds and six assists … He has 10+ points in eight of 16 halves in ACC play, including the second half vs. NC State when he went 4-of-4 from the field and hit five free throws for 13 points to help Duke pull away.

SHARING AND SHOOTING THE ROCK

Duke enters the game with the nation’s third best assist/turnover ratio of 1.71. The Blue Devils also rank top 15 nationally and lead the ACC in field goal shooting (.491, ranked 13th) and assists (18.0, ranked sixth) … Duke has had a positive assist/turnover ratio in 17 of 19 games — its only games with a negative ratio came in wins over Kentucky (9 turnovers, 8 assists) and Virginia Tech (11, 10) … The Blue Devils posted their best assist percentage in last Saturday’s win over Syracuse, dishing out 25 assists on 30 made field goals (83 percent). Duke’s 25 assists were an ACC season high and matched its season best (25 vs. The Citadel) … Duke has averaged 22.7 assists as a team over the last three games and is dishing out a league-leading 17.3 dimes in ACC play … Duke is the only ACC team with three players in the league’s top 10 in assist/turnover ratio with Jeremy Roach ranked second (2.84), Trevor Keels ranked fourth (2.35) and Wendell Moore Jr. seventh (2.07).

DUKE AWAY FROM CAMERON

Winter holiday travel will be back with a vengeance, travel groups predict