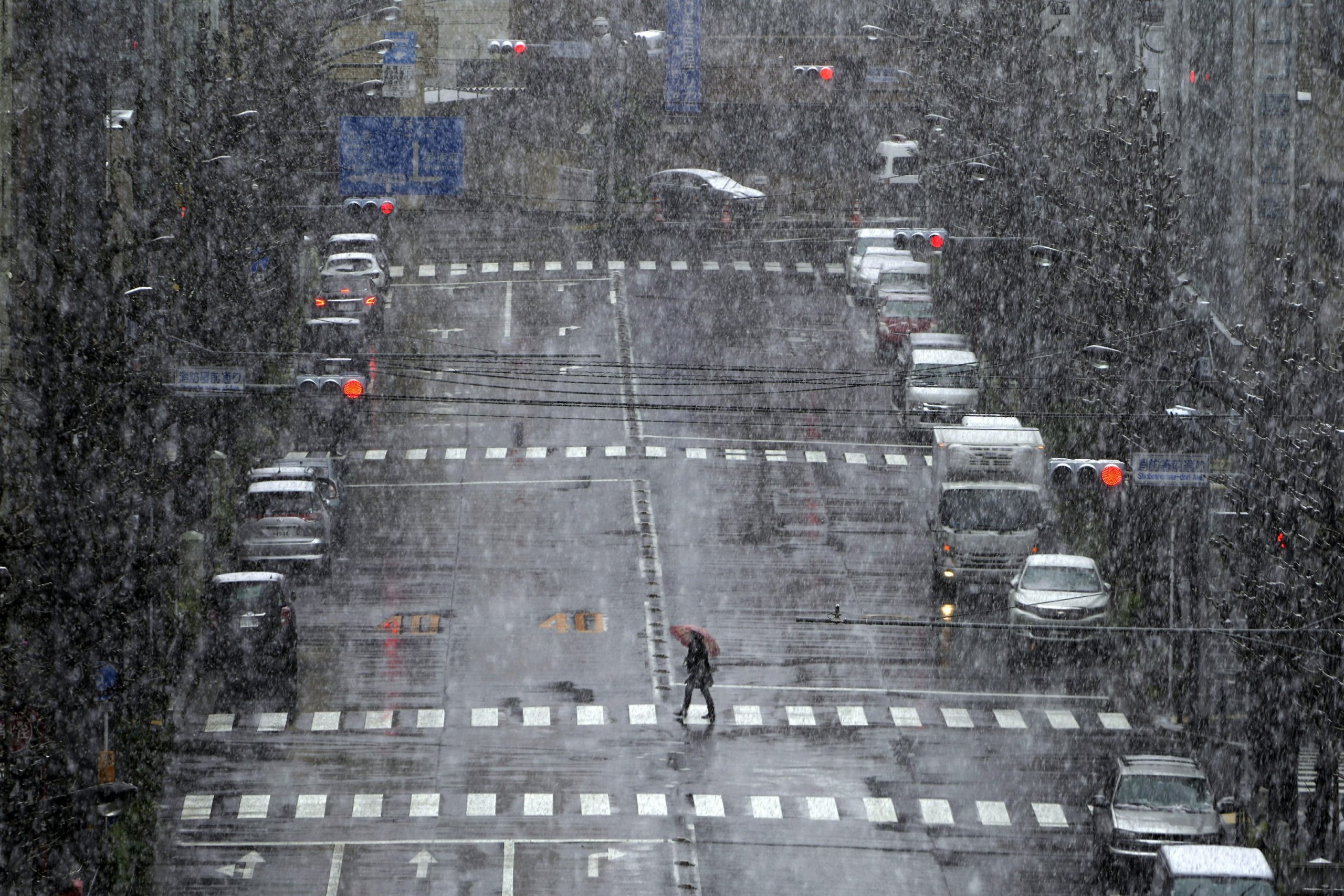 BEIJING (AP) — U.S. health authorities urged millions of residents of the New York City region to avoid non-essential travel due to surging coronavirus infections there as deaths in the United States and Europe rose and countries including Russia and Vietnam tightened travel and business restrictions.

The advisory late Saturday came after the number of confirmed American deaths passed 2,000, more than double the level two days earlier. It applies to New York City, the hardest-hit U.S. municipality, and the states of New York, New Jersey and Connecticut. The advisory cited “extensive community transmission” in the area and urged residents to avoid travel for 14 days.

Worldwide infections surpassed 660,000 mark, with more than 30,000 deaths as new cases, according to a tally by Johns Hopkins University.

The United States leads the world with more than 120,000 reported cases. Five other countries have higher death tolls: Italy, Spain, China, Iran and France. Italy has more than 10,000 deaths, the most of any country.

The disease has spread to other major U.S. cities including Detroit, New Orleans and Chicago and into rural America, where hotspots erupted in Midwestern towns and Rocky Mountain ski havens.

New York Gov. Andrew Cuomo said defeating the virus will take “weeks and weeks and weeks.” The United Nations, which has its headquarters in New York, donated 250,000 face masks to the city. Cuomo delayed the state’s presidential primary from April 28 to June 23.

The travel advisory from the U.S. Centers for Disease Control and Prevention said employees of trucking, food supply, financial services and some other industries were exempt from the measure, It said governors of the three states had “full discretion” over how to carry out the advisory.

Earlier, Cuomo and governors of the other states rejected a suggestion by President Donald Trump that he might impose a quarantine on the region. Cuomo said that would be illegal, economically catastrophic and unproductive since other areas are already seeing a surge.

Elsewhere, Russian Prime Minister Mikhail Mishustin ordered his country’s borders closed as of Monday. Diplomats and residents of the Russian enclave of Kaliningrad on the Baltic Sea were exempt.

Vietnam cut back domestic airline flights and ordered restaurants, shopping malls and other businesses deemed non-essential to close for at least two weeks from Saturday. Gatherings of more than 20 people were banned and the government urged companies to allow employees to work from home if possible.

Vietnam has quarantined nearly 60,000 people who entered the country from virus-infected nations or had contact with infected people, according to the Health Ministry.

For most people, the coronavirus causes mild or moderate symptoms, such as fever and cough that clear up in two to three weeks. But for others, especially older adults and people with existing health problems, the virus can cause more severe illness, including pneumonia, and lead to death.

More than 135,000 people have recovered, according to Johns Hopkins University.

In Detroit, which has a large low-income population, the death toll rose to 31 with 1,381 infections as of midday Saturday.

“The trajectory of Detroit is unfortunately even more steep than that of New York,” said Dr. Teena Chopra, the medical director of infection prevention and hospital epidemiology at the Detroit Medical Center. Chopra said many patients have ailments including asthma, heart disease, diabetes and hypertension.

“This is off the charts,” she said. “We are seeing a lot of patients that are presenting to us with severe disease, rather than minor disease.”

Illinois Gov. J.B. Pritzker said an infant with COVID-19 died in Chicago and the cause of death is under investigation. Officials didn’t release other information, including whether the child had other health problems.

Some U.S. states without known widespread infections began to try to limit exposure from visitors from harder-hit areas.

Rhode Island National Guard troops were instructed to go door to door in coastal communities to find New Yorkers and advise them about a mandatory 14-day quarantine for people from the state.

In Florida, Gov. Ron DeSantis ordered anyone arriving from Louisiana to self-quarantine and said law enforcement officers would set up checkpoints to screen cars from the state.

Louisiana has surpassed 3,300 infections with 137 deaths, according to the health department. Gov. John Bel Edwards said the region was on track to run out of ventilators by the first week of April.

Cases in Chicago and suburban Cook County accounted for about three-fourths of Illinois’ 3,026 total as of Friday.

Chicago Mayor Lori Lightfoot closed popular lakeshore parks after people ignore a statewide order to stay home and urgings to stay away from each other in public.

The governor of Kansas has ordered the public to stay home starting Monday as the the virus takes hold in more rural areas where doctors worry about the lack of intensive care unit beds.

A cluster of three counties in rural Indiana have surging rates of confirmed cases.

One of them, Decatur, population 26,000, has 30 cases with one confirmed death and another suspected, said Sean Durbin, the county’s public health emergency preparedness coordinator.

Several cases were traced to large gatherings earlier in the month, including a religious retreat and a high school basketball tournament.

The county health department has already run out of personal protective equipment, Durbin said. The last supply from the federal stockpile arrived more than a week ago and contained just 77 N95 masks and two dozen face shields.

“I wish there was a stronger word for disappointed,” he said. “I’m calling on them to do better.”

Blaine County, Idaho, a scenic ski haven for wealthy tourists, now has about 100 confirmed cases of COVID-19, the highest rate per capita outside the New York City area. Two people have died.

Germany has fewer deaths than some neighboring countries but has closed nonessential shops and banned public gatherings of more than two people until April 20. It still had its share of grim news: 12 residents of a nursing home in the northern town of Wolfsburg have died since Monday, news agency dpa reported.

Italian Premier Giuseppe Conte announced he had signed a decree freeing up 400 million euros ($440 million) for coupons and packages of food aid to be delivered door-to-door if necessary. Italy has almost completed a three-week lockdown.

In Spain, where stay-at-home restrictions have been in place for nearly two weeks, the death toll rose to 5,812. Another 8,000 confirmed infections pushed that count above 72,000 cases.

Spain’s director of emergencies, Fernando Simon, said the rate of infection is slowing and figures “indicate that the outbreak is stabilizing and may be reaching its peak in some areas.”

Spanish Prime Minister Pedro Sanchez called for a more vigorous response from the European Union. Spain, Italy, France and six other members have asked the union to share the burden of European debt, dubbed coronabonds in the media, to help fight the virus. But the idea has met resistance from other members, led by Germany and the Netherlands.

“It is the most difficult moment for the EU since its foundation and it has to be ready to rise to the challenge,” Sanchez said.

As other governments tightened controls, China eased more restrictions following the ruling Communist Party’s declaration of victory over the coronavirus in the country where it emerged in December.

Subway and bus service resumed Saturday in Wuhan, the city of 11 million people at the center of the outbreak. Restrictions that bar Wuhan residents from leaving the surrounding province of Hubei are due to end April 8.

Associated Press journalists around the world contributed to this report.

Best Airbnbs for Solo Travel in the US (Updated April 2021)

How We’ll Travel This Summer