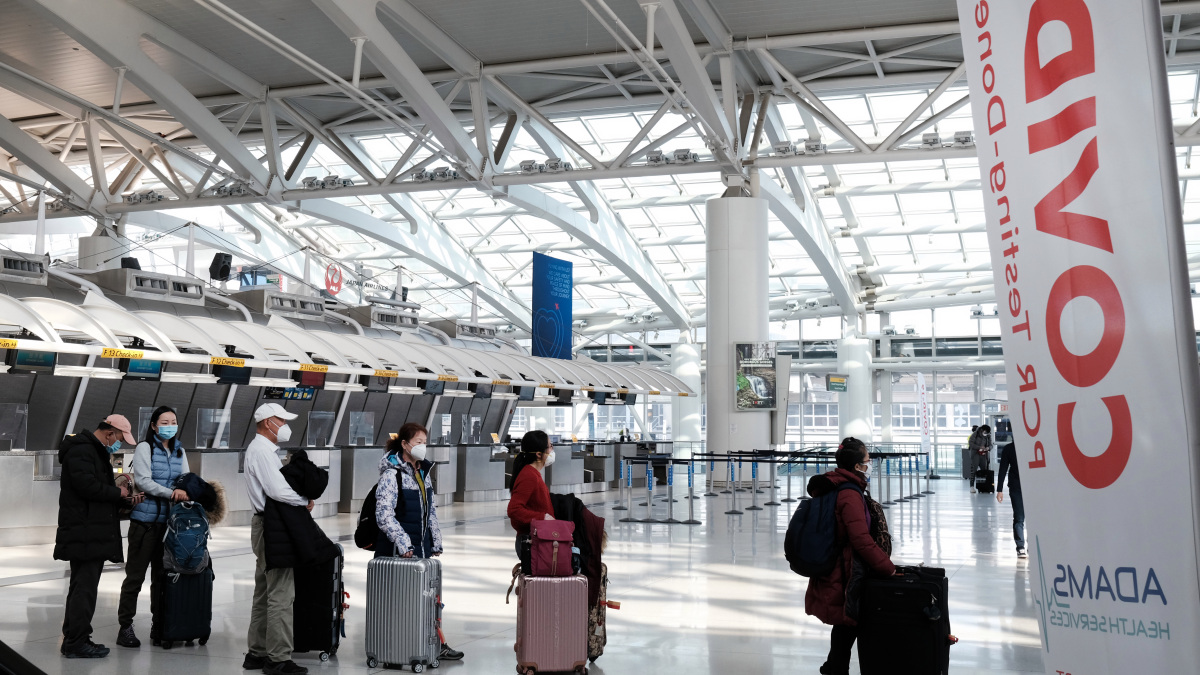 Post-holiday declines in New York’s coronavirus hospitalization and transmission rate have Gov. Andrew Cuomo talking about possibly easing some restrictions later this week. At the same time, the emergence of more contagious variants at home and abroad and limited vaccine supply are complicating the virus war.

Starting Tuesday, new CDC testing requirements take effect for all international travelers to the U.S. Citizens and foreign travelers alike must provide proof of a negative COVID test before departure. They can also provide proof they have had the virus and recovered. Those who don’t comply should be stopped at the gate.

Also Tuesday, restrictions for non-U.S. travelers from Brazil, Ireland, the U.K. and 26 other European countries that had been set to expire by order of former President Donald Trump will continue, under President Joe Biden’s executive order signed Monday. Biden also added South Africa to the list, while the U.S. detected its first case of the Brazilian variant in Minnesota.

President Joe Biden is expected to sign new travel restrictions in a bid to control the spread of coronavirus in the United States. Restrictions will primarily target countries like South Africa, Brazil and much of Europe, where new strains of the coronavirus have emerged in recent days.

That country first detected another highly transmissible variant that has some similarities to the U.K. strain but also some different mutations, which experts have said raised concern about current vaccines’ effectiveness against it. The South African variant has not yet been confirmed in the U.S., though the UK variant case count continues to rise. As of Tuesday, the tri-state area has confirmed at least 31 cases (25 in New York, eight in Connecticut, two in Jersey).

Both Gov. Andrew Cuomo and New York City Mayor Bill de Blasio had called on the feds to impose new travel restrictions amid the latest coronavirus surge abroad. Cuomo demanded a testing requirement, while de Blasio had called for more stringent measures, including a total, yet temporary, U.K. travel ban.

Of the multitude of variants that have emerged over the last year, Dr. Jay Varma, the mayor’s senior advisor for public health, said Tuesday that the U.K., South African and Brazilian strains are most concerning, given their high level of infectiousness. Varma referenced preliminary data that appears to show the U.K. variant may also be more lethal, but stressed the need for more extensive study.

In the meantime, if people want to double-mask, a phenomenon that drew attention on Inauguration Day, it certainly can’t hurt, Varma said.

Ultimately, New York officials say their hope is to slow the spread of infection enough to keep pace with the vaccination race, which they expect to ramp up soon. Both Cuomo and de Blasio say they believe the Biden administration will change the process fundamentally. It’s just going to take a bit of time.

The vaccination process in the city and state has been continuously hampered by sluggish supply from the federal government. The latest blow came Monday as de Blasio announced that New York City’s planned 24/7 vaccine mega-sites at Yankee Stadium and Citi Field, as well as the Empire Outlets on Staten Island, are postponed until the city can get a 200,000-shot-a-week supply — nearly double what’s expected to actually come in this week. The mayor said he wants to ramp up vaccination to 300,000 a week, but he’s barely getting a third of the doses.

More than 650,000 total doses have been administered in the city thus far — a number higher than the population of Portland, Oregon, de Blasio said Tuesday as he tried to give a clear picture of the scale of the effort. De Blasio says the city has less than 8,000 first doses left on hand — a drop from about 19,000 a day earlier — and he expects fewer than 110,000 to come in this week as far as resupply. Nearly 75,000 second dose shots have yet to be scheduled, he added.

The mayor had set a goal of dosing at least 1 million with initial shots in January, but has acknowledged in recent weeks the supply limitations could get in the way. Barring that, he says the city has the capacity to dose a half million people a day — and he hopes the five boroughs will be able to reach that objective next month, once the Biden administration puts its own stamp on the rollout.

“In the meantime, we’re dealing with the residue of what was left to us previously, and we have almost no supply to allow us to create new opportunities for people, new appointments for people,” de Blasio said.

Click on each provider to find more information on scheduling appointments for the COVID-19 Vaccine.

Cuomo has instructed vaccine sites across the state to operate under a “week to week” scenario, meaning they should not schedule appointments beyond the next dose allocation they know they will receive so as to avoid cancellations and postponements — like the 22,000-plus shots that were delayed in NYC last week.

It’ll likely take more time for many sites to work out the disconnect between the number of appointments and the number of shots available. In the meantime, more than a dozen hubs in the city are temporarily closed due to supply issues.

More than 7 million New Yorkers are now eligible for the COVID vaccine and the state is dosing about 80,000 people a day, on average, but at a weekly federal allocation of first doses around 250,000, it could take half a year just to give first shots to everyone currently eligible. Cuomo has not even put a timeline on how long it could take to administer first shots to those not even on the line yet.

So what’s the reason behind the dramatic shortages in COVID vaccine supplies — and who is to blame for it? NBC New York’s Chris Glorioso reports.

Even as he continues to shore up the state’s sprawling distribution network — which now includes more than 3,000 vaccine providers — Cuomo is looking to make “adjustments” to current restrictions now that he says it appears New York has moved beyond the peak of the post-holiday spike and started to come down the other side.

More specifics are expected in the coming days, but any easing of rules is likely to target the state’s micro-cluster zones, which haven’t been updated since mid-December. The current zones touch parts of all five boroughs of New York City.

What is not on the table just yet, however, is a reopening of indoor dining in New York City, which was suspended entirely across the five boroughs in mid-December. Cuomo said that ban is a “city-specific issue” and he is not contemplating any changes to it at this time.

Asked to react to the governor’s statement Tuesday, de Blasio said he’d like nothing more than to see restaurants doing well and more people employed. He said New Yorkers are ready to try to help revive the struggling industry, but said the five boroughs haven’t emerged far enough from the latest spike yet to reopen.

Even as its numbers begin to improve from the holiday increases, New York City is struggling in certain spots more than others. According to a New York Times report last week, 54 ZIP codes are still seeing seven-day rolling positivity rates above 10 percent. When asked about possible new restrictions for those areas, de Blasio said nothing is off the table but the main focus is on hospital capacity.

“The hospitals are doing remarkably well under the circumstance, but it’s still a very dangerous moment, particularly because of the new variant. So, this is a daily conversation, all options on the table,” the mayor told reporters Monday.

The city’s rolling hospitalization rate is still high — above 5.00 and around the highest since the mayor debuted that metric as part of his regular reporting last month — but it’s overall positivity rate has declined a bit over the last week. Declines in hospitalizations and deaths will follow accordingly (and respectively).

Statewide, hospitalization capacity is about 48 percent, Cuomo said Monday. As of that report, New York City had 31 percent of hospital beds available over a seven-day rolling average. No hospital in the state has come close to the threshold that would warrant an economic shutdown. The wheels would churn if a hospital was at risk of topping 85 percent capacity within a 21-day period.

Cuomo said Monday hospitalization and positivity rates in three regions — Long Island, the Bronx and the Finger Lakes — have been of key concern as of late and the state would be focusing on those areas. The governor didn’t immediately elaborate on what kind of focus or potential measures that might entail.

When Could I Get the Vaccine?

Answer the questions to calculate your risk profile and see where you fall in your county’s and state’s vaccine lineup. This estimate is based on a combination of vaccine rollout recommendations from the CDC and the National Academies of Sciences, Engineering, and Medicine.

In the meantime, all energy — from the local to state to federal level — is focused on accelerating a vaccine rollout that has been widely criticized from the start. According to the CDC, less than 55 percent of the 41 million-plus total doses distributed to states to date have been administered. Fewer than 20 million people have received at least one shot; about 3.3 million have gotten both.

The new head of the CDC under President Biden acknowledged over the weekend that the federal government doesn’t have “as many doses as we would like” of vaccine and that limited supply will be an ongoing issue for the near future.

Cuomo, New Jersey Gov. Phil Murphy and other heads of states across America plan to join a White House call Tuesday, where they are expected to get more clarity on vaccine supply and distribution going forward.

The U.S. surpassed 25 million confirmed coronavirus cases over the weekend, according to a tally by NBC News. The nation has also seen more than 419,000 virus-related deaths since the onset of the pandemic began more than a year ago.