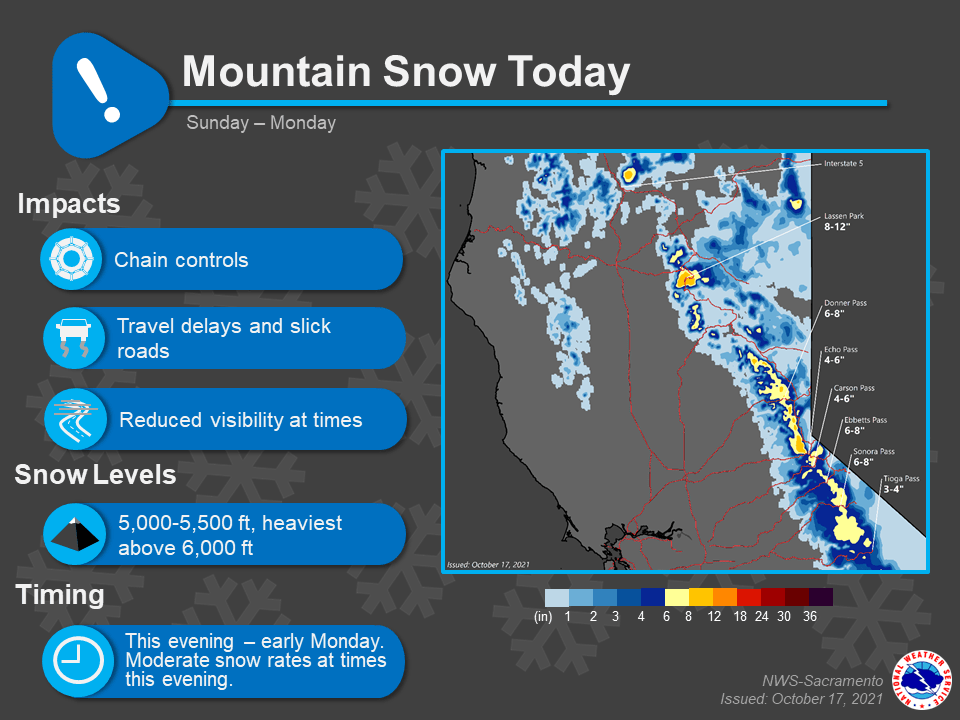 Cooler weather along with a chance of precipitation returns this afternoon and overnight. Mountain snow will bring travel impacts this evening into tomorrow morning. More unsettled weather mid to late week into next weekend.

A pattern change begins today for interior Northern California as multiple weather systems are forecast to impact the area through the week. A quick-moving upper trough is approaching West Coast early this morning, increasing cloud cover across the area. The trough and associated surface front will begin to move inland later today, bringing cooler temperatures and precipitation chances to Northern California.

The surface front and precipitation isn’t expected to reach the Coastal Range until late afternoon, with precipitation spreading east through the evening and continuing through the overnight hours, mainly over the Sierra and Southern Cascades.

Snow levels will begin around 6000 to 7000 feet Sunday afternoon, falling to around 5000 to 6000 feet after sunset. CAMs continue to suggest a period of weak instability tomorrow evening as the trough axis passes through, mainly along the Sierra and foothills. This could produce some locally enhanced rain and snow showers and possibly even brief, isolated thunder.

Mountain travel and recreational impacts are likely with this snow. A Winter Weather Advisory remains in effect for the Sierra and Southern Cascades for elevations above 5500 feet Sunday evening through early Monday morning.

Breezy winds are also forecast today as the trough passes through. Winds will begin picking up this morning with the strongest winds this afternoon through early evening, slowly decreasing overnight. In the Valley, expect winds generally 10 to 20 mph with gusts up to 25 to 30 mph. Strongest winds will be in the mountains and foothills with west winds 20 to 30 mph, gusts up to 35 to 45 mph, locally higher over ridgetops and favorably oriented canyons.

Temperatures will also be much cooler with 70s in the Valley and 40s to 60s in the mountains and foothills.

Shortwave ridging builds over California Monday into Tuesday, with dry weather returning. However, temperatures will cool even more behind the trough passage with Valley temperatures in the 60s and 30s to 60s in the mountains and foothills. The next weather system is forecast to impact Northern California late Tuesday into Wednesday.

Current ensemble guidance shows this shortwave will likely clip the interior with the majority of precipitation remaining northwest of the forecast area. However, lighter showers are forecast late Tuesday into Wednesday as a frontal boundary moves through the area, mainly for locations north of Highway 50.

The majority of QPF is expected over the Coastal Range and Southern Cascades, with snow levels generally above 6000 to 7000 feet. Uncertainties still remain in specific precipitation timing and amounts, though accumulation looks limited at this time.

Significant model differences exist by this time period leading to forecast uncertainty with QPF. Forecast leans towards wetter solutions. Precip threat ramps up next weekend as models indicate a 160+ kt zonal polar jet stretched across the Pacific with LFQ extending over NorCal.

Google, a Longtime Ally of Travel Sites, Is Now a Powerful Rival

Travel to Hawaii during Covid-19: What you need to know before you go