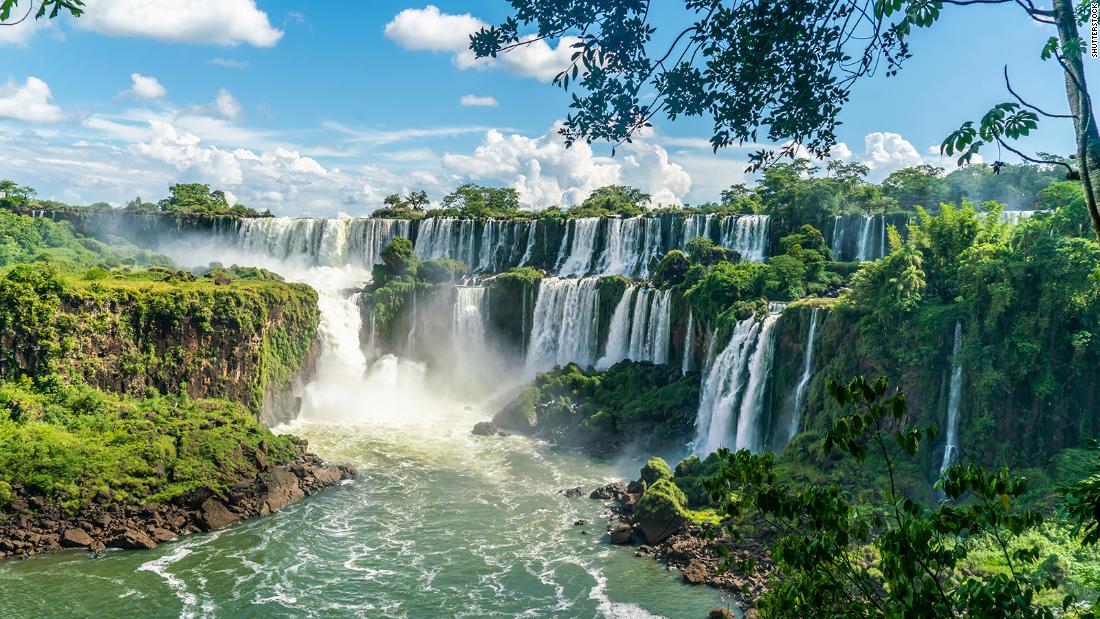 (CNN) — Many of us have been forced to rethink travel plans in the wake of Covid-19, but if you’re soothing your canceled-vacation-blues by daydreaming about future adventures, Lonely Planet’s new “Ultimate Travel List” might be just what you need.

The new list, collated by Lonely Planet’s team of experts, spotlights must-see and must-do experiences, from spotting wildlife on the Galapagos Islands to admiring the spectacular Iguazú Falls waterfall that spans Argentina and Brazil, to wandering the geothermal landscapes of Yellowstone National Park.

The team scoured past Lonely Planet guidebooks and also reviewed each destination’s commitment to sustainability.

“The options to travel are clearly limited right now, but the list is aimed at inspiring to 2021 and beyond when travel starts recovering,” Tom Hall, Lonely Planet’s vice president of experience, tells CNN Travel.

“This is intended to be something that really drives people’s bucket list, not just for now, but for the future.”

Read on for Lonely Planet’s top 10, and to see which destination grabbed the top spot.

The Annapurna circuit trek is a hike you won’t forget.

Parts of the walk are very high altitude, including the stunning Tilicho Lake, which only adds to the appeal for thrill-seekers. According to Lonely Planet, the Annapurna Circuit is “everything a good trek should be.”

Visiting Salar de Uyuni, the biggest salt flat in the world, feels like you’re walking through the clouds. After rainfall, water on the lake’s salty surface creates a glossy, glass-like illusion, turning the lake into a mirror that reflects the sky above.

Salar de Uyuni is also pretty impressive when it’s arid, and the surface becomes cracked with geometric patterns. Plus, when it’s dry you can visit the two lake islands, Isla Incahuasi and Isla del Pescado.

The atmospheric surrounds of Angkor, a cluster of beautiful crumbling temples surrounded by jungle, comes in at number eight on Lonely Planet’s list. Cambodia’s top tourist attraction, this vast UNESCO World Heritage Site is a remarkable place to visit.

Angkor Wat, the most famous Angkor temple complex, was designed as a visual representation of Mount Meru, the home of the Hindu gods, and Lonely Planet calls Angkor “a monument to human ingenuity.”

The Río Iguazú Falls is a spectacular cascading waterfall, located between Argentina and Brazil. Watching the water cascading over the vertical ledge is an incredible experience — in part because of the sheer scale: Iguazú is actually made up of 275 waterfalls and the tallest, the Devil’s Throat, is 80 meters deep.

It’s the drama of Iguazú, as well as its beauty, that nabs it a spot on this list: “The thundering vibrations of crashing water remind you in no uncertain terms of the power and splendor of nature,” says Lonely Planet.

Picturesque Lake Bled is home to a quaint, white church, sitting on a verdant island and surrounded by aqua-blue water, silhouetted against the backdrop of the Julian Alps.

Back in the day, pilgrims would travel to the church to worship and later it was the vacation hangout for 19th-century royalty. Today, tourists enjoy walking and cycling around the lake — while those who want to test the waters can opt for a ride in a pletna boat — a type of Slovenian gondola.

Ponng! Bluughh! Poowee! Once smelled, Yellowstone’s not easily forgotten, but this US National Park is also the largest geothermal area on earth, dancing to a tune of burps and bubbles.

Visiting the park, home to more than 500 active geysers including the famous Old Faithful, is a wondrous experience. The park’s also home to wildlife including bighorn sheep, elk, grizzly bears and wolves.

Grand Prismatic is another must-see Yellowstone attraction — the largest hot spring in the US, it’s a shining rainbow of multicolored water.

Each year when the Okavango River floods with water, it transforms into a spectacular wilderness.

Each year the Okavango River is flooded by water from the Angolan highlands, transforming this extraordinary wilderness.

The Okavango Delta is also a wildlife hotspot — home to everything from majestic elephants to exquisite reptiles — and one of Africa’s greatest and most exclusive safari destinations.

Visitors to Okavango Delta can journey along its rivers by powerboat and in traditional dugout canoes called mokoro. Lonely Planet reckons it’s the perfect trip for travelers looking to be at one with nature.

Visiting the spectacular Uluru sandstone monolith — an Australian landmark — is an unforgettable experience. Brassy bronze in color and beautifully glowing when the sun sets, Uluru is considered sacred by the original inhabitants, the Anangu people, who believe that the spirits of their ancestors live on there.

Head to Uluru to walk around the circumference of the rock, and learn about its history and tradition.

Wildlife is one of the top attractions of the Galapagos Islands.

A nature lover’s dream and eco-traveler’s paradise, the Galápagos are home to some of the world’s most colorful creatures, including glorious iguanas, ancient tortoises, diving penguins and lively seals.

Volcanic rocks, turquoise-blue waters and a stunningly diverse eco-system are some of the reasons why this destination is ranked second on Lonely Planet’s list.

While the ancient city of Petra is simply a famous archaeological site to most of the world, for university professor Sami Alhasanat, it’s home

A once almost abandoned “lost city,” largely forgotten by Europeans for 1000 years, Petra is the perfect place for adventurers who want to visit a destination like no other. The Nabataean people lived in Petra from the fourth century BCE to the first century CE, and this sandstone city is now a UNESCO World Heritage Site.

Top travel editors look into a crystal ball. What do they see?: Travel Weekly