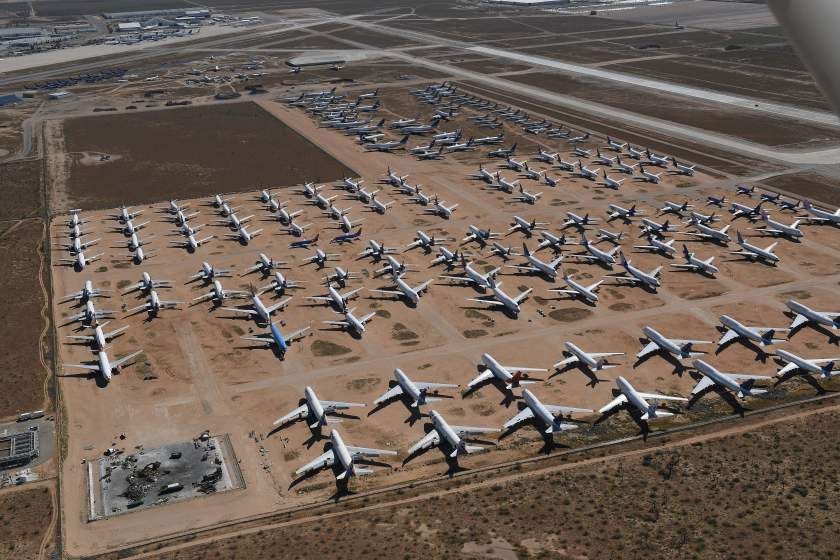 With demand for air travel in a nose dive, U.S. airlines are taking hundreds of commercial planes out of service and parking them in remote desert airports, with the hope that the aircraft will be back in the air shortly.

The coronavirus outbreak has pushed so many planes out of service that the business of storing aircraft is taking off, with some remote airports parking more and more planes on seldom-used runways and taxiways.

“There is no doubt, we are extremely busy,” said Lisa Skeels, director of corporate initiates for ComAv, an aircraft maintenance and storage firm at the Southern California Logistics Airport in Victorville.

Because of the steep drop in demand for air travel and flight restrictions to international destinations, Delta and American Airlines, two of the world’s largest carriers, have announced plans to ground more than 1,000 planes combined. Southwest Airlines said it parked two dozen 737-700 planes over the weekend.

The need to store idle planes is one of several challenges facing the nation’s airline industry, which had only recently been reporting record profits and had invested heavily in new routes, spacious new airport lounges and more fuel-efficient planes.

As a result of the COVID-19 pandemic, U.S. airlines have cut capacity by more than 1.4 million seats, or 6% in the last week alone, according to OAG, an airline data company.

Some of the nation’s busiest airports have become ghost towns, with foot traffic at Los Angeles International Airport dropping 38% in the second week of March compared with the same period a year earlier, according to data analytics company Placer.

Some airlines, including low-cost carrier Spirit, are trying to drum up business by offering one-way tickets as low as $18 a seat, plus fees.

Major airlines reportedly are drafting plans for a potential shutdown of virtually all passenger flights because of falling demand and coronavirus outbreaks among air traffic control employees, according to the Wall Street Journal, citing anonymous sources.

A spokesman for American Airlines said “we do not have any plans to shut down,” while a Delta Air Lines representative declined to comment on the Journal story.

Big U.S. carriers have announced plans to slash domestic flights by 30% and international flights by 75%, and some of the aircraft serving those routes may never return to service.

Airlines are likely to retire their older, less-efficient planes first, according to industry experts. Delta Air Lines has told investors that it was planning to accelerate the retirement of its fleet of McDonnell Douglas MD-88s and MD-90s, which came into service in the 1980s.

The biggest aircraft storage operations are in desert facilities in places such as Victorville, Roswell, N.M., and Tucson, where humidity is low and the runways and taxiways are long enough to accommodate any size of commercial plane.

Although airport operators say the business of aircraft storage is surging now, they don’t expect to reach capacity anytime soon.

“We still have a lot of room,” said Scott Stark, director of the Roswell International Air Center. The 5,000-acre facility, located about six miles south of the city of Roswell, can accommodate about 800 planes but is currently storing about 275.

Stark said the air center has an additional 200-acre paved area, which is normally unused, that can also be used to park planes, as long as the pilots are careful “not to park on the soft spots” in the aging pavement.

Tulsa International Airport has been able to close a seldom-used runway to fit about 50 American Airlines planes without impacting regular operations, said Andrew Pierini, marketing director for the airport.

The airport has space for many more planes — the exact number depends on the size of the planes — and has reached out to other airlines that may need to ground aircraft, he said.

At the Southern California Logistics Airport in Victorville, ComAv, the aircraft maintenance and storage company, operates a 240-acre facility with enough space to store more than 500 planes, plus hangars that can be used to maintain several more.

ComAv is now storing about 275 planes and can hold an additional 200 planes, Skeels said. ComAv has been inundated with requests for its aircraft storage services but Skeels said she can’t divulge the name of the airlines seeking the services or the number of planes they may want to store.

The coronavirus outbreak is only the latest crisis to boost demand for aircraft storage facilities.

Hundreds of Boeing 737 Max planes were grounded after the crashes of Indonesian Lion Air Flight 610 in October 2018 and Ethiopian Airlines Flight 302 in March 2019. A combined 346 people died in the crashes.

Boeing had reported more than 5,000 orders for the plane but delivered fewer than 400 aircraft, most of which have been stored at remote airfields until aviation regulators determine that the plane is safe to fly again.

Grounding a 130,000-pound plane involves more than just a big stretch of pavement.

Aircraft storage facilities typically charge a base rate simply for parking a plane. The biggest expense is the cost of the aircraft services to keep the plane maintained and ready to return to operation.

At Tulsa International Airport, the standard parking rate for an aircraft is 40 cents per thousand pounds a day. That means that a Boeing 777-300ER that weighs roughly 370,000 pounds would cost around $150 a day to store.

In addition to the cost of parking, a facility may charge maintenance costs that begin at about $2,000 per plane a month, depending on the services required, according to published reports.

A commercial passenger plane can’t sit indefinitely on a desert tarmac if the airline hopes to quickly return the aircraft to service, said Henry Harteveldt, an airline analyst with Atmosphere Research Group.

The amount and type of maintenance that must be done to an idle plane depends on how soon the airline hopes to return the aircraft to operation, Harteveldt said.

An aircraft’s avionics, hydraulics, electronics and other operating systems must be regularly checked and tested. Maintenance manuals typically spell out how often such services must be performed.

If a plane is going to be stored for several months, the aircraft will be put into an “airplane coma”, which involves draining or replacing all liquids and sealing the doors and the engines, Harteveldt said.

The question for the airline industry is how long to park the unused planes.

If the industry expects the coronavirus outbreak to affect travel for several months, then the grounded planes may undergo the more intensive idling process. But if travel demand is expected to return within weeks, the grounded planes can simply get routine maintenance so they can be ready to fly shortly.

Airbnb: Where are the best places to travel in the U.S. right now?