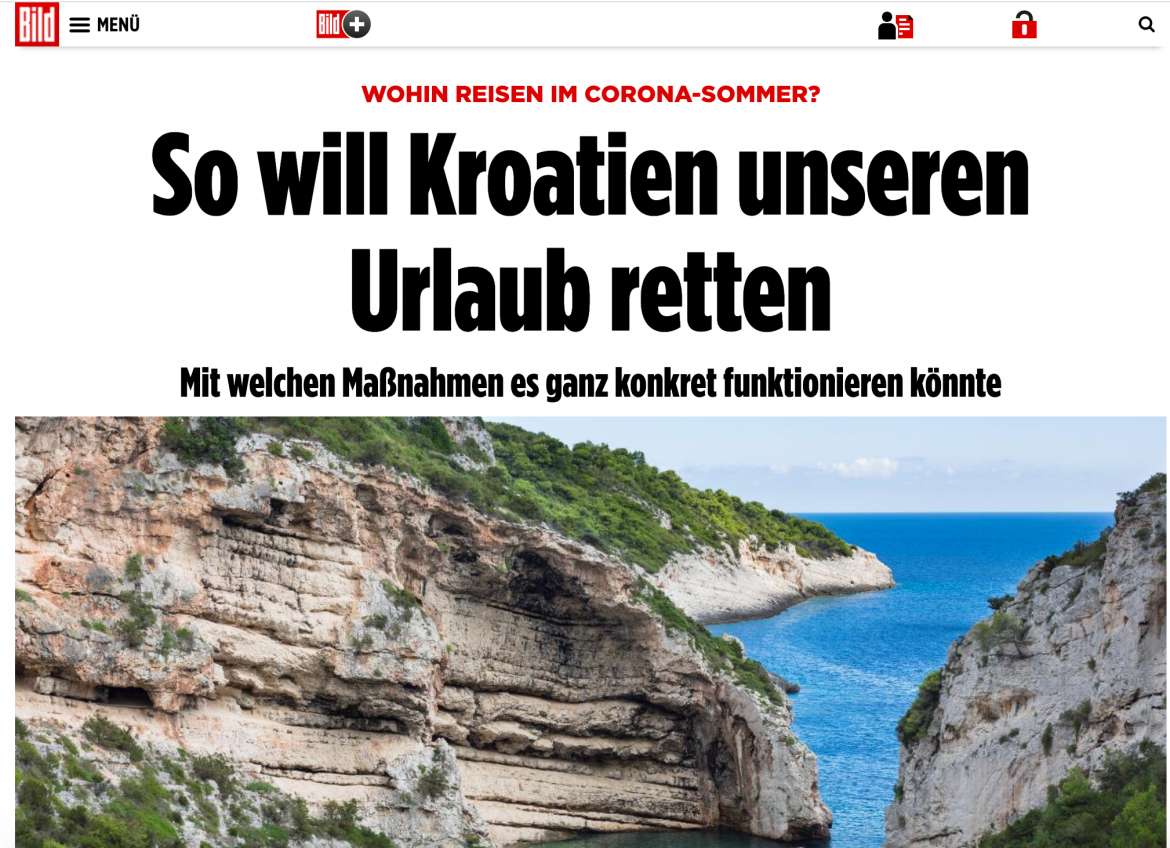 April 25, 2020 – German newspaper Bild reported on Friday that Croatia could be an ideal destination for anyone planning a holiday this summer.

In the title “WOHIN REISEN IM CORONA-SOMMER?” (Where to travel in the Corona Summer?), the German daily goes on to say why Croatia should be on your list, reports Novac.hr.

The newspaper also quotes Romeo Draghicchio from the Croatian National Tourist Board in Frankfurt, who says that Croatia has many accommodation capacities where it is possible to keep a space between guests, and that by the end of May, the Croatian authorities will make new travel decisions.

Bild points out: “Croatia has put in place strict measures to combat the virus in a timely manner. It was a decision that paid off. The Ministry of Tourism with health experts is preparing a plan that will soon make it possible to open the country to tourists.”

German online portal Holliday Check has released a poll showing that 40 percent of those surveyed are sticking to their plans for this year’s holiday. As many as 60 percent of those polled are transparent about the question of whether they’d like a refund if a trip falls through because of the pandemic as a deciding factor when booking holidays. Last week, the Alliance of German Tour Operators announced that domestic tourism could benefit from the crisis this summer, as well as tourism from neighboring countries and those destinations, such as Croatia, which can be reached by private transport.

Also supporting the story is that German Minister for Economic Cooperation and Development, Gerd Muller, has announced that travel outside Germany will be made possible. Bild writes that it is certain that the most popular destinations for Germans – Italy, Spain and France – will fall off as travel destinations this year, and that Croatia may be more attracted to them, as it has begun to position itself as a “corona-free” destination.

The president of the German Association of Travel Agencies, Norbert Fiebig, criticized statements about the complete cancellation of holidays outside Germany, saying that it is important to make decisions that will allow travel, emphasizing that trips shouldn’t be canceled outright.

On Monday, April 27, EU tourism ministers will, at the initiative of Tourism Minister Gari Cappelli, discuss via a video conference the impacts of the pandemic on tourism and measures to recover the sector as quickly as possible, the Ministry of Tourism announced.

Due to the global pandemic and its extremely negative effects on tourism around the world, including in the EU and Croatia, the topics of discussion are mainly the consequences of the pandemic, but also the measures that can be taken to help the tourism sector recover as quickly as possible after loosening restrictions on travel and business.

“The coronavirus has stopped a lot of things in the world, including almost all business tourism processes and travels, and all EU Member States are in the same, uncertain situation. Therefore, it is important to talk and share experiences, because we are all troubled by the same issues, from how to ensure that the system works in these circumstances to the stability of the entire economy and thus the tourism sector,” Cappelli said.

He also announced that he would exchange views with potential EU tourism counterparts on possible programs and plans to tackle similar threats in the future for the tourism sector, which he would also link to the 2018 Croatian initiative when he met tourism ministers in Sofia and presented an initiative for better positioning of tourism within the EU.

“This initiative was just about establishing a common financial fund for tourism at the EU level, with which it would be possible to quickly respond to potential threats and challenges in tourism such as this one,” Cappelli said.

Croatia is now joining the campaigns of UNWTO and WTTC World Tourism Organizations and the European ETC to promote tourism and especially gastronomic offers to motivate tourists and travel partners when possible, the Croatian National Tourist Board (CNTB) reported.