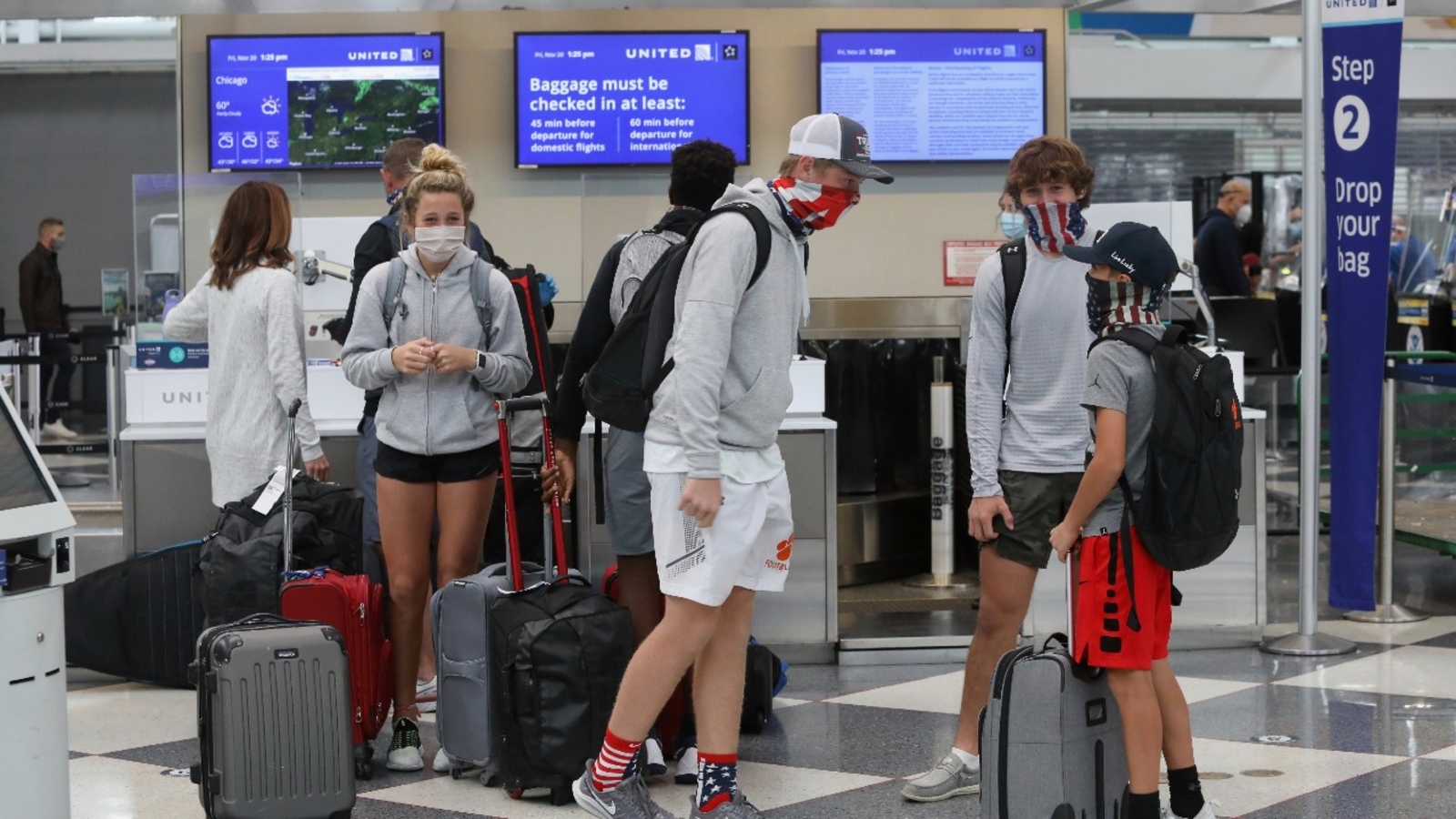 Dr. Rochelle Walensky, director of the Centers for Disease Control and Prevention, said Monday that she’s worried the US could see “another avoidable surge” of COVID-19 if mitigation measures — such as mask-wearing, physical distancing and avoiding crowds or travel — are not followed.

“As I’ve stated before, the continued relaxation of prevention measures while cases are still high and while concerning variants are spreading rapidly throughout the United States is a serious threat to the progress we have made as a nation,” Walensky said at a White House briefing.

“Increasingly, states are seeing a growing proportion of their COVID-19 cases attributed to variants,” Walensky said. She said two newly identified variants — B.1427 and B.1429 — are estimated to account for 52% of cases in California, 41% in Nevada and 25% in Arizona.

The B.1.1.7 variant, first identified in the United Kingdom, is estimated to be responsible for 9% of cases in New Jersey and 8% in Florida, Walensky said.

“We must act now, and I am worried that if we don’t take the right actions now, we will have another avoidable surge — just as we are seeing in Europe right now and just as we are so aggressively scaling up vaccination.”

She said the Biden administration is encouraging governors, as well as the private sector, to maintain or reimpose coronavirus restrictions.

“We are looking at these data, we’re reaching out to individual states, trying to encourage them. We are having weekly governors’ calls. We’re doing outreach with states, territories to encourage them to look at their case data, to look at what’s happening with the variants and to do as much outreach as we can to try and slow down the relaxation,” Walensky said.

More than a million passengers have traveled through US airports daily for at least 11 days in a row, according to data from the Transportation Security Administration — at a time that experts say cases of a dangerous variant are climbing across the country.

The TSA says it screened 1,543,115 people at airports nationwide on Sunday, a pandemic-era record that topped a record set only two days earlier.

“What we’re doing is essentially spreading the B.1.1.7 variant across the nation,” Dr. Peter Hotez, dean of the National School of Tropical Medicine at Baylor College of Medicine, told CNN.

The spread of variants, in combination with the still small percentage of fully vaccinated Americans, is why experts have stressed state leaders should not be lifting COVID-19 measures just yet — and Americans should be doubling down on safety measures, to avoid another surge of the virus.

But while at least a dozen governors have eased restrictions this month and cases across the US are no longer seeing the steep declines recorded earlier this year, one expert says it’s unlikely the US will see another COVID-19 surge.

That’s because the number of prior infections and now vaccinations in the US have begun to form “enough of a backstop” to prevent another spike, Dr. Scott Gottlieb, the former Food and Drug Administration commissioner, told CBS’s “Face the Nation.”

“I think what you could see is a plateauing for a period of time before we continue on a downward decline — in large part because B.1.1.7 is becoming more prevalent, in large part because we’re pulling back too quickly, with respect to taking off our masks and lifting the mitigation,” he said.

Other experts have said that plateauing of cases the US is reporting could serve as a predictor for another surge. Emergency physician Dr. Leana Wen told CNN last week she believes the US could be on the cusp of another surge.

Others say it’s difficult to predict what will happen.

“It’s very hard to say,” Hotez told CNN. “We’re in a race, that’s what it comes down to. We’ve gotten a single dose (of COVID-19 vaccine) into about a quarter of the US population … and it could go either way right now.

“This is why it’s really important for the governors to stay the course and to implement masks and social distancing.”

You asked, we answered: Your top questions about COVID-19 and vaccines

Some travelers have landed in popular spring break destinations like Florida, where local officials say the vacationers have been more than they can handle.

After Miami Beach police struggled with overwhelming crowds of mostly-maskless partiers over the weekend, the city commission on Sunday extended an emergency order. A curfew was declared for the city entertainment district from 8 p.m. Thursday through March 30. Bridges and causeways into the city will be closed at night on those days.

Mayor Dan Gelber noted the curfew means not only that people may not be out on the streets, but also that bars and restaurants must close as well.

Florida has so far reported the highest number of cases of the B.1.1.7 variant — which experts say is highly contagious and potentially more deadly — in the country, according to data from the CDC.

“I wish that folks would at least mask up,” emergency physician Dr. Megan Ranney told CNN, referring to the spring break crowds. “I expect that very few of those young adults have been vaccinated and watching them gather together in those crowds, even outside, gives me fear that they’re going to bring that B.1.1.7 variant back to their home state and spread it.”

The CDC currently continues to recommend that Americans delay travel. And earlier this month, Walensky warned that every time travel escalates, a spike in infections tend to follow, citing July 4, Labor Day and the winter holiday season.

So far, more than 82.7 million Americans have gotten at least one dose of a COVID-19 vaccine, according to CDC data. That’s roughly 25% of the US population.

More than 44.9 million — about 13.5% of the population — have been fully vaccinated, the data shows.

Leaders across the country are employing more methods to get shots into arms faster — like expanding eligibility requirements and opening more mass vaccination sites.

On Monday, the Biden administration announced the creation of the 22nd federally-run community vaccination center, at the Central Washington State Fair Park in Yakima County, Washington.

West Virginia Gov. Jim Justice on Monday opened vaccine eligibility to all residents over the age of 16. New York Gov. Andrew Cuomo said the state would make vaccines eligible for everybody 50 and above — lowering the age from 65 — starting Tuesday.

In Wisconsin, people as young as 16 with some medical conditions can now be vaccinated, and dentists in the state can administer COVID vaccines under some circumstances.

But challenges to reaching herd immunity remain, such as vaccine hesitancy and political divisions. A recent CNN poll conducted by SSRS shows that while 92% of Democrats say they have gotten a dose of the vaccine or plan to get one, that falls to 50% among Republicans.

When asked why he believed there is skepticism among Republicans, Arkansas Gov. Asa Hutchinson told CNN he thought it is a “natural resistance to government and skepticism of it.”

“The hesitancy is worrisome not just here, but all across the country, and I expect as a country we’ll get to 50% vaccination rate of the population. But we’re going to have a harder time getting from 50% to 70%. And it’s about overcoming the skepticism, it is about education … but it’s also confidence,” he said.

Meanwhile, AstraZeneca is expected to apply in the next few weeks for emergency use authorization for its COVID-19 vaccine in the US.

The findings from the new Phase 3 trial, which included more than 32,000 participants, could boost confidence in the vaccine, which was originally developed by the University of Oxford.

Many European countries paused their rollout over a small number of blood clot concerns — going against the advice of international medical agencies as the continent confronts a third wave of infections fueled by variants of the virus.

The trial showed that the vaccine was well-tolerated and identified no safety concerns, the company said. An independent committee “found no increased risk of thrombosis or events characterised by thrombosis among the 21,583 participants receiving at least one dose of the vaccine,” according to AstraZeneca.

The new data came from a Phase 3 clinical trial conducted in the US, Chile and Peru. AstraZeneca says it plans to submit the findings to a scientific journal for peer review.

Some people gained weight while sheltering in place

A group of study participants gained on average more than 1.5 pounds per month during COVID-19 shelter-in-place orders in March and April, according to a research letter published in JAMA Network Open.

From March 19 to April 6, 2020, 45 out of 50 US state governments issued shelter-in-place orders to slow the spread of the novel coronavirus.

“On average, they gained about 0.6 pounds every 10 days or 1.8 pounds per month during shelter in place orders,” Dr. Gregory Marcus, one of the authors of the research and a cardiologist and professor of medicine at the University of California, San Francisco, told CNN.

The oddest opener: Eagles travel to face a nameless Washington team in an empty stadium – The Philadelphia Inquirer