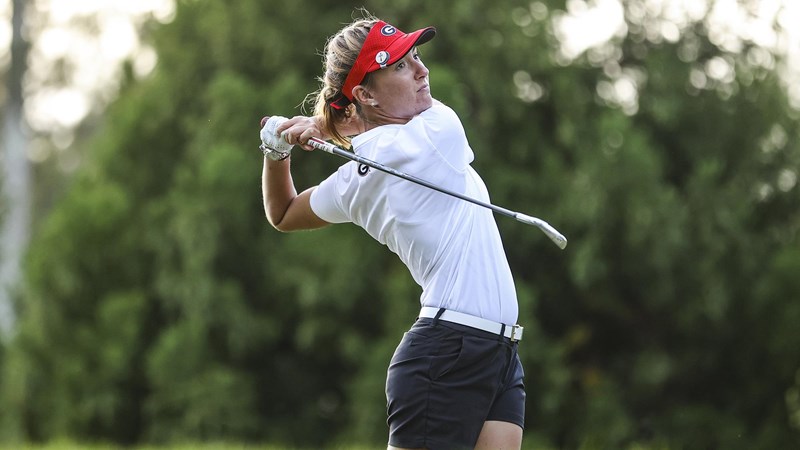 ATHENS, Ga. — The No. 20-ranked Georgia women’s golf team will compete this week at one of the game’s historic courses, Medina Country Club. The Bulldogs begin play in the Illini Invitational outside of Chicago with 36 holes on Monday followed by 18 on Tuesday.

“It really shows how far women’s golf has come and is going,” head coach Josh Brewer said. “Playing a venue like Medina is very exciting for our team. They’ll get to walk the same fairways that some of the game’s greatest have. There’s no need motivate this week when you’re playing a course like Medina.”

“If I didn’t earn a spot to play in this event, I don’t know if I’d ever have the opportunity to play this amazing golf course,” senior Jo Hua Hung said prior to Sunday’s practice round. “I’m excited to go out, check out the course and really enjoy this experience.”

Hung will occupy the top spot in the Bulldogs’ lineup, which also features Jenny Bae, Caroline Craig, Caterina Don and Isabella Holper. In addition, Zoë Walker will compete as an individual.

Two weeks ago, Hung competed individually in the Mason Rudolph Championship and shot a career-low 7-under 209 to lead all Bulldogs and finish fifth overall. She has posted par-or-better scores in all six fall rounds to date and credits much of that success to a club change.

“I changed my driver before school started,” Hung said. “Since that change, my driver has become much more stable.”

Walker will be making her first appearance representing Georgia in an event outside of Athens. She competed in both the fall and spring editions of the Liz Murphey Collegiate Classic last season. Walker played two seasons of junior college golf at the College of the Desert in Palm Desert, Calif., before transferring to Georgia in 2019.

“I’m very excited to compete for UGA outside of our home course,” Walker said. “I’m focused on going out there and playing my game and having fun with it. To be able to do that on a course like Medina where events like U.S. Open and the Ryder Cup have been played makes it even more exciting.

“I worked hard over the summer,” Walker added. “I think going to the SECs with the team last season as a cheerleader and walking along the sidelines was a huge motivator for me. I could see myself out there and thought ‘I can do that. I have the ability.’ That was motivation for me this summer to work hard and keep believing in myself.”

After a week dominated by rain in Athens last week, the Illini Invitational opens a span when Georgia will play two tournaments in seven days. The Bulldogs will travel to Chicago to California to compete in the Stanford Intercollegiate on Friday-Sunday to wrap up their fall campaign.

“It’s nice to be rested entering a very busy end to our fall schedule,” Brewer said. “Mother nature helped us with that last week. We rested physically and mentally, and now we’re focused on going out and building on our previous results this fall. We want to put three consistent rounds together. If we do that, we fell like we’ll have a chance to get our first win of the year.”

“Last week was so rainy that we didn’t practice that much,” Hung said. “I was a little tired after competing the past fews weeks so to get a few days off was good. I feel great and am excited to get back out there and compete.”

The No. 20 Bulldogs are one of four teams in the top 25 of the latest Golfweek/Sagarin rankings competing at Medina along with No. 16 Texas Tech, No. 21 Oklahoma and No. 22 San Jose State. Rounding out the 15-team field are Colorado, Illinois, Indiana, Kent State, LSU, Louisville, Maryland, Notre Dame, Purdue, San Diego State and Wisconsin.

“We really don’t look at the other teams in the field much,” Brewer said. “There are certainly some schools here that we don’t see that much, but we are focused on taking care of ourselves and how we play. If we can do that, we should have a chance to win. So this week is more about taking care of Georgia than the other schools here.”

Georgia will be paired with Texas Tech and Illinois for Monday’s opening rounds. The Bulldogs, Red Raiders and Illini will begin on holes Nos. 1-3 at the 9:30 a.m. ET shotgun start. Live scoring will be available at golfstat.com.

Mastodons Travel To Wisconsin For Horizon League Match Against Milwaukee