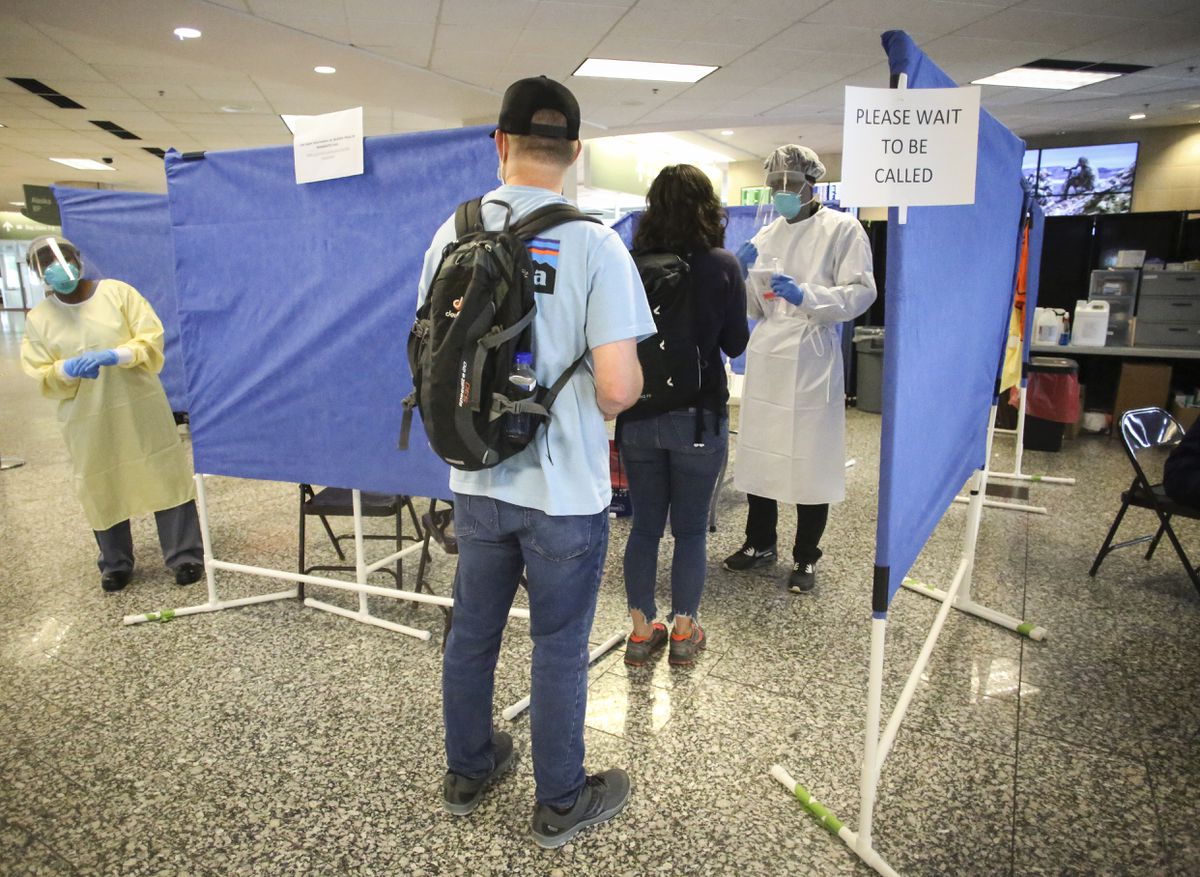 Much of the travel news these days is directly related to COVID-19.

It appears that all of us, including travelers, need to be reminded of the risks of catching the virus. We also need to stay up to date on how to get where we’re going. Whether you’re traveling by car or by air, things are changing.

Are you concerned about driving through Canada on your way to the Lower 48? If you’re on vacation, the border still is closed. If you’re returning home from the Lower 48, or if you are traveling for work, you can make the journey. But the Canadians have added some new twists to make sure you minimize the risks to Canadians and pass through their country as quickly as possible.

When you get to the border, you’ll be issued a hang tag for your rear-view mirror. It signals to others that you’re traveling and notes the date by which you must depart Canada. You’ll also get a handout from Canada’s public health agency with clear instructions:

2. Remain in your vehicle as much as possible.

4. Practice physical distancing at all times.

6. Use a drive-thru if you need food.

7. Wear a mask or face covering.

Drivers have to take the most direct route, without stopping at national parks or tourist areas. Further, travelers should have documentation that indicates the purpose of your travel.

Are you expecting visitors who are flying in later this summer? Due in part to the shortage of available tests and a sharp spike in COVID-19 cases throughout Alaska, Gov. Mike Dunleavy announced that all arriving air travelers must test negative for COVID-19 ahead of traveling and produce their results upon arrival. These new rules go into effect on Aug. 11. Inbound travelers no longer have the option of an on-site test at the airport unless they are Alaska residents. There is no longer an option to quarantine for 14 days. Only a negative result on a test taken within 72 hours of arrival is accepted.

It’s unclear what will happen if travelers show up without the test results. At Dunleavy’s briefing, he said details will be coming later. It’s unclear if noncompliant visitors will be refused entry, or whether they’ll be detained. I doubt very much that the airlines will be checking test results prior to boarding in Seattle.

“We know travel is a key way of spreading the virus. Just after spring break, all of the cases in Alaska were travel-related,” said Dr. Tom Hennessy, an infectious disease epidemiologist with UAA’s College of Health. “So it makes sense to try and mitigate that.”

Prior to his position at the college, Hennessy spent 25 years working with the federal Centers for Disease Control and Prevention. Specifically, he worked at the CDC’s Arctic Investigations Station in Anchorage. He’s been tracking disease outbreaks since the early 1990s.

Although Hennessy and his family are big travelers, they’ll be traveling the highways and byways of Alaska this summer. “Traveling on the road system can be a good way to minimize risk,” Hennessy said.

“I went to Seward in June to go camping,” he said. Although he was maintaining his physical distance, that wasn’t the case for everyone. “I saw all sorts of people mixing and mingling … and I think they were spreading the virus.”

There is a way to mess it up, though, even on a road trip. “If there are three or four families together and you start increasing your bubble, well, you’re making a mistake,” Hennessy said.

When it comes to air travel, he’s canceled a bunch of trips.

“I think airline travel is particularly risky,” he said.

In Hennessy’s investigations, a “close contact” is someone within 6 feet with whom you’ve spent more than 15 minutes.

“It’s not the airlines’ fault,” he said. “They micro-filter the air and they exchange the air in the cabin often. But the basic problem is putting people shoulder to shoulder.”

Never mind 6 feet. It’s usually just a number of inches between you and one of your fellow airline travelers.

Having an N95 mask could potentially reduce your risk of catching the virus on a plane, but it needs to be fitted properly.

“I’m trained as a medical provider to wear an N95 mask. But I had to try on four different masks to find one that fit my face,” he said. “So until you’ve been fitted and trained, just having the N95 mask doesn’t provide any more coverage than a cloth covering.”

Not only is flying in a plane risky — so is running an air carrier during the pandemic.

Remember Ravn Alaska? The regional air carrier stopped flying on April 3 due in part to the dropoff in passenger business as the global pandemic worsened. Through the ensuing bankruptcy process, most of the small planes and facilities were sold off to competitors. On July 9, the larger planes were sold to an entity called FLoat Shuttle based in Southern California. Rob McKinney, FLoat’s president, anticipated the planes would be flying again “in about 30 days” to Dutch Harbor and other destinations.

Ravn’s Dash-8s are parked out at the Anchorage airport. They haven’t moved since April, so it’s doubtful they’ll be in the air on McKinney’s schedule.

But last week, a Juneau-based air carrier, Alaska Seaplanes, indicated they plan to restore air service on several Ravn routes. Dutch Harbor is at the top of the list. Other possible routes include Anchorage-Homer, Anchorage-Valdez and Anchorage to King Salmon, Dillingham and Bethel, according to Alaska Seaplanes President Kent Craford.

Alaska Seaplanes is partnering with Wexford Capital, which just acquired Florida-based Via Airlines — a Part 121 airline — in a bankruptcy sale. A Part 121 certificate is necessary in order to operate larger planes like Ravn’s Dash-8s or Alaska Air’s 737s.

Craford said he plans to start service in spring 2021, based on the necessary FAA approvals. “The feds are the X-factor in this equation,” he said. “We could be up and running sooner if we get the approval.”

Whether you’re flying or driving, there’s always an element of risk. With the COVID-19 pandemic in full bloom, the risk factor is going up.

[Because of a high volume of comments requiring moderation, we are temporarily disabling comments on many of our articles so editors can focus on the coronavirus crisis and other coverage. We invite you to write a letter to the editor or reach out directly if you’d like to communicate with us about a particular article. Thanks.]