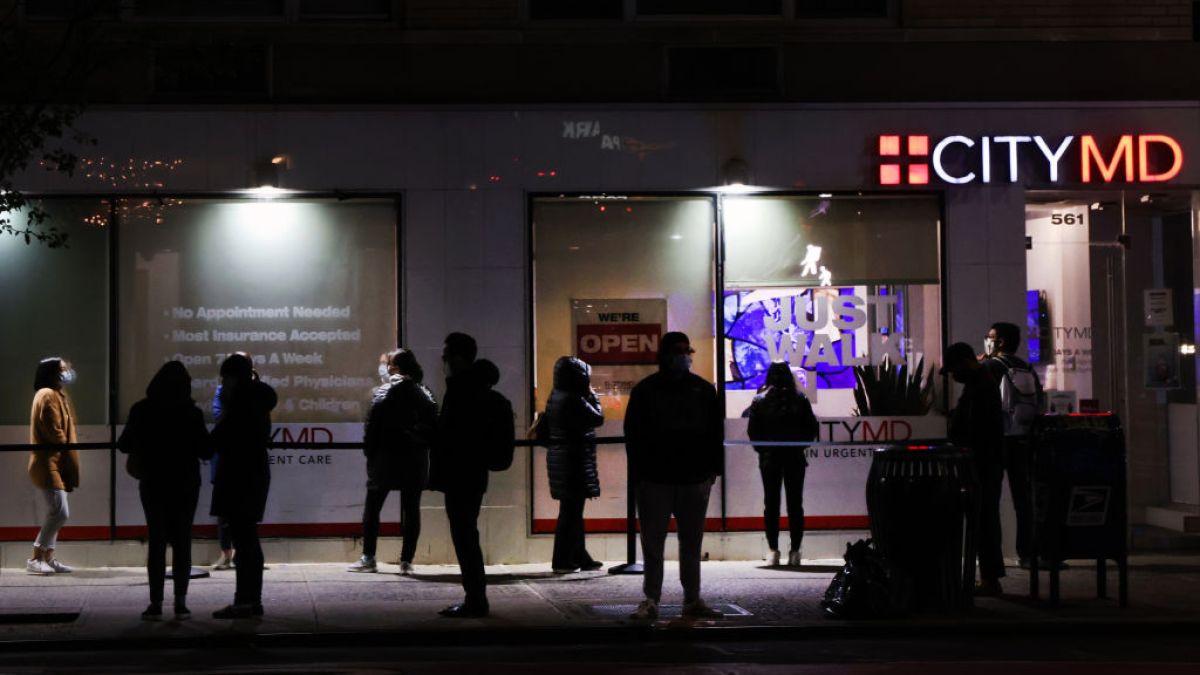 Hundreds of thousands of New York City public school parents await what appears to be an all-but-certain fate in the shutdown of in-person learning, days after Mayor Bill de Blasio told them to have an alternative plan at the ready.

That warning from the mayor came Friday, as the city’s seven-day rolling positivity rate came the closest to his 3 percent shutdown threshold that it has ever been. The weekend came and went. Schools stayed open Monday. Schools are open again Tuesday, with the citywide rolling rate holding at 2.77 percent.

Will the kids get another day? It’s been an every 24-hour question.

“There is a second wave upon us. We’re trying to beat it back,” de Blasio said in his daily briefing Monday. “If we do have to shut down, we would work to come back very quickly with additional safety measures.”

He hasn’t elaborated on what the road map back to in-person learning would look like in terms of metrics or timeframe. But, facing criticism for sticking to 3 percent even as the in-school positivity rate remains well below 0.2 percent, de Blasio says he’s open to incorporating different testing strategies in that decision.

Mount Vernon officials have issued a stay-at-home advisory to protect residents from the rise in COVID-19 cases. Marc Santia reports.

The micro-cluster model is one he’s reviewing, he said. Ultimately, the hope is to return schools to full in-person instruction five days a week at some point before the 2020-21 academic year ends June 25.

Schools have not been the problem as far as the city and state’s rising infection rates, Gov. Andrew Cuomo has said, though he has stopped short of intervening in potential closures. They are, in fact, a bright spot. The same, however, cannot be said of college campuses in the tri-state area and across the country.

A New York Times survey of more than 1,700 U.S. colleges and universities found more than 252,000 COVID cases and at least 80 deaths since the pandemic began. A number of colleges in New York had to move all-remote barely after the fall semester began, some of them as early as August, as they faced outbreaks tied to illicit student gatherings off-campus and smaller collegiate parties.

Many universities cracked down on those early. Many implemented new testing requirements. But with holiday breaks looming, the threat of infected family members via travel, or bringing the virus back to campus via the same means, is of paramount concern to authorities at every level.

Before they return in the spring, after two months away, students will first have to quarantine for seven days. Katherine Creag reports.

The State University of New York, which was hit early and hard with a series of outbreaks across its campus network, announced last month that it would require students to test negative for COVID before they can leave campus for Thanksgiving break. Its campuses will switch all-remote after the break.

That could be part of a new sweeping regional strategy Cuomo may unveil in the following days following an emergency weekend summit with the governors of New Jersey, Connecticut, Pennsylvania and Delaware to discuss potential next steps to curb a COVID resurgence that continues to worsen on a daily basis.

New Jersey Gov. Phil Murphy said in his briefing Monday that guidelines for college students returning from break was a key part of the interstate discussion Sunday, given the volume of people traveling across state and international lines. Murphy said the governors agreed on “fairly specific testing requirement and quarantine” guidelines for college students returning to campus after break. Cuomo, who did not hold a briefing Monday, is expected to address the summit in the coming days. Also discussed: airports and enforcement, among other topics.

New restrictions had been expected to come from the summit, and Murphy doled out the first of those Monday, announcing indoor gatherings in New Jersey would be limited to 10 starting Tuesday, down from the previous capacity cap of 25. Outdoor gathering caps will be reduced by 70 percent, to 150 from 500, next week as the state battles renewed community spread that has contributed 5 percent of its cumulative case total since March in just the last four days, Murphy said.

Officials in the tri-state area and across the nation are bracing for the potential impact of Thanksgiving, both in terms of travel and household gatherings, which have become a driving source of spread over the last month. The mantra has been to avoid travel and to avoid Thanksgiving gatherings as a rule, but acknowledging many won’t heed that advice, officials have suggested people wear masks even when with their own families. New Jersey’s health commissioner said Monday singing shouldn’t be permitted and music should be low to avoid shouting, which could spew saliva — and spread COVID.

The city of Hoboken said Monday it would go fully virtual for a week after Thanksgiving break to try to avoid any potential holiday-related spread. Morris County’s Mount Olive School District will stay remote through mid-January.

The developments come as New Jersey broke its own single-day pandemic case record twice in two days over the weekend. The state’s positivity rate has soared well above 9 percent. Hospitalizations are at their highest levels since June.

New York still holds the third- or fourth-lowest positivity rate in the nation on any given day, but that measure has become relative to the success it had in containing the virus over the summer, where it saw 38 straight days of a positivity rate below 1 percent. Hospitalizations are climbing rapidly in the Empire State too, The state has averaged more than 4,500 new cases over the last five days, more than quadruple the number it was seeing at the end of October.

That was six weeks ago. Daily deaths have remained low, but still relatively high compared with the low single digit tolls reported over the summer. Cuomo has said a viral increase associated with the national and international climate, colder weather and holiday travel is inevitable. For him, it’s about mitigating the increase.

The New York governor imposed new statewide restrictions last week, including a 10 p.m. indoor service curfew for bars, restaurants and gyms and a 10-person cap on indoor gatherings, including those within private homes. He hopes New Yorkers will be up to the self-enforcement challenge. If not, more rules may come.

Indoor dining could be next on the chopping block, Cuomo has warned.

The recent tri-state battles are reflective of national struggles amid a COVID surge that has left no state untouched. The United States has not reported fewer than 100,000 new daily COVID cases since doing it for the first time amid the pandemic on Nov. 4. On Friday, it reported nearly 200,000 new cases in one day. Its cumulative case and death tolls far surpass any nation in the globe.

Experts say life in the U.S. won’t return to any semblance of normalcy until there is an effective and widely available vaccine. That may not happen for months, despite encouraging news from Pfizer. Moderna followed up with its own positive news Monday, saying it expects to file for emergency approval of its vaccine in the “coming weeks,” with 20 million doses ready to ship this year.

Cuomo wasn’t quite as bullish on the vaccine timeline, however, saying on MSNBC that the “production schedule” for a new vaccine will have to be ramped up considerably if the goal is to make it available to everyone by spring 2021. He also said it would take a “massive effort” to make sure everyone has access to a vaccine, while expressing concerns that it might be inaccessible to underserved and minority communities — which have already been impacted harder by COVID-19 — that don’t necessarily have major drugstore chains or personal physicians.

Even when a safe, effective vaccine is approved, delivery and distribution to millions of Americans remain a mammoth challenge for governors. And Dr. Anthony Fauci, the nation’s leading infectious disease expert, says people should not abandon masks or social distancing even after they’ve been vaccinated.

“Even though, for the general population, it might be 90[%] to 95% effective,” Fauci said, reporting to effectiveness rates shown in Pfizer and Moderna trials, “you don’t necessarily know, for you, how effective it is.”

Up to 10 percent of immunized people could still get the virus, even at those high success rates, CNBC reported.